Another installment from the Hell and Gone website is long overdue, so here it is:


DD214: Official discharge form; "walking papers;" ticket to the World.
Deck: Floor or ground (navy/marine term).
Delta Force: A semi-secret subunit within the US Army portion of SOCOM, organized for direct action in counterterrorist ops, hostage rescue, etc.
DEVGRU: Short for "Development Group"--unofficially "Seal Team 6," a sub-unit within the Navy SEALs with a mission similar to Delta Force.
Didimau: Leave, run, escape, evacuate. (Vietnam era.)
Dittybop: To walk at civilian speed, usually with a swagger.
DILLIGAF: "Does it look like I give a (flute)?"
Dinki-dau: Insane; nutso; loony; whacked-out. (Vietnam era.)
Fartsack: A sleeping bag.
Fast mover: Jet fighter, jet bomber or jet attack aircraft (not counting the A10).
FNG: "F(lipping) New Guy"; a rookie; cherry; newbie.
Frag: Noun: Fragmentation grenade. The famous WWII/Korea "pineapple" type was replaced by a "baseball" type during Vietnam. Verb: To assassinate a unit member--usually an officer or NCO--in the field.
Front Lean-and-rest: The position from which push-ups are executed. There is no resting (or leaning, for that matter) involved. "Lean'n'rest" for short.
FUBAR: F(ouled) up beyond all recognition. (Originally a navy term, WWII era. Used by characters in Saving Private Ryan probably because the technical advisor was a marine.)
F(orget) the dumb s(tuff): Just get the job done, and don't waste time and effort going by the book, following assinine regulations or adhering to strac SOPs.
Posted by Hank Brown No comments: 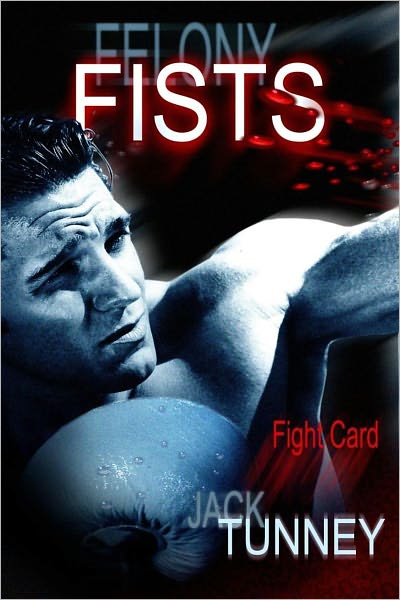 So far as I know, it's been quite a while since fiction like this has been available, and I'm pretty stoked that it's making a comeback.

Felony Fists is an installment in the new pulp Fight Card series by "Jack Tunney." For you armchair fight historians out there, that nome de plume is exactly what you suspect it is--a fusion between Jack Dempsey and Gene Tunney, though the series takes place in the '50s, not the '20s.

Patrick "Felony" Flynn is an LA beat cop who is also possibly the world's most seasoned amateur middleweight. He's offered a spot on the detective squad if he'll help knock gangster Mickey Cohen out of boxing. That means he has to move up in weight to light-heavy, turn pro, and check Cohen's fighter Solomon King's ascent toward a title shot against Archie Moore (who really was light-heavyweight champ at that time, and quite an extraordinary man). A middleweight moving up to fight a badass light-heavyweight is a monumental chore all by itself, but in case the reader doesn't appreciate that, the pressure is heaped upon Felony Flynn increasingly right up until the last chapter.

During all this time, Flynn becomes partners with another rookie detective, Tombstone. A black detective on an historically/notoriously bigoted force like the LAPD must be exceptional, and Tombstone is. This subplot, a counterfeiting subplot, and the fight plot all come together and are tied off nicely. The writer set out to tell a retro-style pulp boxing yarn and I'd say he did a good job.

For my taste, Cohen's tactic to get Flynn to throw the fight was overkill. The stakes were plenty high already, as were the odds against Flynn in the fight. For Cohen to be so scared of an Irish brawler with one professional fight (against an over-rated has-been) presenting a threat to a contender who consumes talented pros for breakfast (and who Archie Moore is worried about) was just too much. In Flynn's other fights, he never was 100% on. He was either distracted, or careless...something to put the outcome in doubt. I really would have liked to see Flynn go to war from Round One in the climactic fight, and let the tension come from the fact that he's overmatched, and making it through 15 rounds with Solomon King requires a superhuman effort. Plenty of tension that way and far more realistic.

Speaking of realism, I just have to provide the following advisory about boxing technicalities:

In boxing, a right-handed fighter does not have a right jab or a right hook. He jabs and hooks with the left. He throws straight rights or a right cross. (Everything I'm saying is mirror-opposite for a southpaw, of course.) What some people call a right hook from a right-hander is actually either an angled right uppercut or a roundhouse right--an ill-advised punch 99% of the time, though I did see Lennox Lewis score a knockout with one.

I don't know how many other readers would notice or care about getting these fundamental details right, but for me it was an annoyance in what otherwise was an enjoyable read. And to be fair, a LOT of authors who write about boxing make these kind of mistakes. Even legendary writers like Robert E. Howard didn't always get everything right.

At the back of this book are sneak previews of two other tales from the Fight Card series. In The Cut Man, the author confuses the 1st Marine Division ("The Old Breed") with the 1st Infantry Division ("The Big Red One"). That made me grind my teeth, and I know any marine or grunt who reads it will have problems with it, too. I hope the author will correct this (edits are easy and painless for e-books), because details like this can really ruin a story for some readers.


Don't ask me why it's taken so long for me to see this movie. It's up there with The Dogs of War for famous flicks about mercenaries. Finally having seen it, my feelings are mixed.

In short, I'd like to read the book because I suspect it is substantially better (usually a safe bet). There are things that bother me a lot about the movie from a tactical perspective. Even if the writer/screenwriter knows their stuff, actors and directors can still screw up the realism. These guys fight like they have no concept of cover or concealment. They don't even attempt to maintain reasonable intervals in the bush. They wear their berets (even the maroon ones, complete with shiny insignia) in the field--honestly, who does that? I could go on.

On the positive side, there were some realistic things. A plan only survives up until the first contact with the enemy, and we see this happen more than once in this flick. And our heroes are betrayed by the suits who sent them to do the dirty merc work. Boy, does that ring true--especially in Africa.

My original title for Hell and Gone was The Has-Beens. That label fits the Wild Geese even better than it fits my fictional mercs. I think there were only 2 bodies under 40 years old in the whole outfit.

Anyway, there are more wasteful activities you could engage in for 129 minutes. And I do want to read the book, now.
Posted by Hank Brown 2 comments: