The sepia tone cover is mainly an attempt to create some visual uniformity to the other books in the series. Not sure how well it will go over, and I will probably restore the original cover before long. It just seems a shame to mute Derrick Early's vibrant colors, however out-of-place that may make it appear in between the first and third novel in the Retreads series. 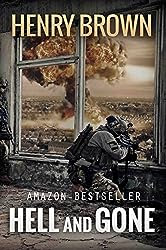 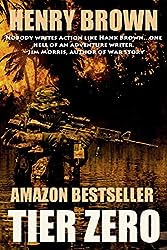 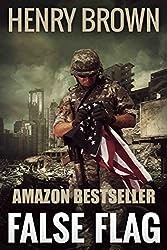 Anyhoo, the images above are all links. If you haven't read Tier Zero yet and appreciate old-school men's fiction, you can get the e-book at 99 cents for a while.
Posted by Hank Brown No comments: 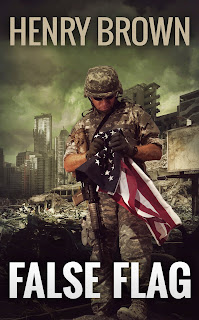 What will be the coup de gras in the fundamental transformation of the USA---economic collapse? Race war? Terrorism?

Maybe all of the above, and then some, in this speculative saga about a near, dystopian future.

"What's that? It's a Rocco's Retreads novel, but not a shoot-em-up?"


Fear not, Two-Fisted Blogees: there is enough mayhem spread about to slake your heathen bloodlust. False Flag not only shifts the genre, but is a segue into full-blown #TEOTWAWKI (post-apocalyptic), which I anticipate for the fourth book.

Triumph of the Sun

I can't believe I never read Wilbur Smith before I stumbled on this book. After reading it, I educated myself on the author and his work. Like many prolific writers who crank out historical fiction, Wilbur Smith has created some fictional family trees, and crafted multiple stories around the generations thereof. In this novel, the Courtney and Ballentine families intersect during the siege of Khartoum. The novel takes the characters years beyond that event, and makes use of the author's extensive research on Africa, and the Sudan in particular, to provide a glimpse inside 2 distinct cultures.

I suspect Wilbur Smith is a closet anthropologist...not just because of the attention he gives animals in some of his novels, but because of the human actions and interactions he depicts--usually according to type. This book has a lot to offer: adventure, romance, action, tragedy, and a couple happy mini-endings.


Read the detailed review over at Virtual Pulp!

The Right Stuff by Tom Wolfe

I didn't see the movie until many years after it came out. When I did, the intentional mythologizing of history really grabbed me. I just had to read the book.

The book didn't disappoint. Wolfe's account of the early Space Race was both fascinating and hilarious.

I've never forgotten his colorful expose` on the collective subconscious of the testpilots/astronauts, in particular. Like the ziggurat metaphor used to describe the egocentric construct of the unspoken hierarchy according to how much of the Right Stuff each individual thought he and his peers possessed. In fact, I was obsessed with Wolfe's depiction for a while. I was rubbing elbows with military pilots at the time, and considering becoming one myself, and could see the truth in it: huge egos and equally enormous wristwatches.

I at least had the ego.

Anyway, the psychological insights are only dressing for the thorough investigative reporting Wolfe wove into an informative and entertaining inside story of an elite subculture in history.

For those who haven't both read the book and seen the film, I encourage you to correct that. It's not a case of one being better than the other; instead they compliment each other.