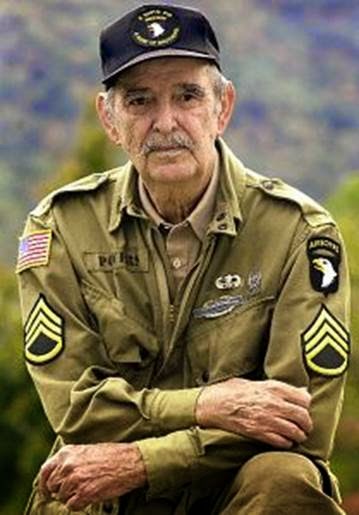 I recently received an e-mail that has made the rounds for the last few years. As I received it the story therein was attributed to Chuck Yeager. I was skeptical of that, and yet the story itself rang true. I did a little cyber-legwork and found the story was most likely originally told by a guy named Mark Pfeifer. Here it is:

Shifty volunteered for the airborne in WWII and served with Easy Company of the Infantry Regiment, part of the Infantry. If you've seen Band of Brothers on HBO or the History Channel, you know Shifty. His character appears in all and Shifty himself is interviewed in several of them.

I met Shifty in the Philadelphia airport several years ago. I didn't know who he was at the time. I just saw an elderly gentleman having trouble reading his ticket. I offered to help, assured him that he was at the right gate, and noticed the "Screaming Eagle", the symbol of the on his hat.

Making conversation, I asked him if he'd been in the or if his son was serving. He said quietly that he had been in the 101st. I thanked him for his service, then asked him when he served, and how many jumps he made.

Quietly and humbly, he said "Well, I guess I signed up in 1941 or so, and was in until sometime in at which point my heart skipped.

At that point, again, very humbly, he said "I made the jumps at Toccoa, and then jumped into do you know where Normandy is?" At this point my heart stopped.

I told him yes, I know exactly where Normandy was, and I know what was. At that point he said "I also made a second jump into Holland, into Arnhem." I was standing with a genuine war and then I realized that it was June, just after the anniversary of

I asked Shifty if he was on his way back from France, and he said "Yes. And it's real sad because these days so few of the guys are left, and those that are, lots of them can't make the trip." My heart was in my throat and I didn't know what to say.

I helped Shifty get onto the plane and then realized he was back in Coach, while I was in First Class. I sent the flight attendant back to get him and said that I wanted to switch seats. When Shifty came forward, I got up out of the seat and told him I wanted him to have it, that I'd take his in coach.

He said "No, son, you enjoy that seat. Just knowing that there are still some who remember what we did and still care is enough to make an old man very happy." His eyes were filling up as he said it. And mine are brimming up now as I write this.

There was no parade.

No big event in Staples Center.

No wall to wall back to back 24x7 news coverage.

No weeping fans on television.


Back in the day I attended a few 82nd Airborne Association Conventions, and met some of the war veterans who went before me. BTW it wasn't just 82nd veterans who attended these events, but there were guys who had been 101st, 11th Airborne Division, 503rd PIR and "Triple Nickle" 555th PIB.
A lot of these guys, had they not earned jump wings at one point in their lives, would have joined the Moose Lodge or something so they'd have a fraternity of drinking buddies to BS with. For them it was that kind of thing. But I also met some guys who were a lot like Shifty as he's presented in this anecdote. Paratroopers were bad dudes, but these guys had a quiet humility about what they did that I couldn't help admiring.
There aren't many WWII veterans left in 2014, and most of the US population is oblivious to the sacrifice made and what we owe them. I will never forget.
Posted by Hank Brown No comments: