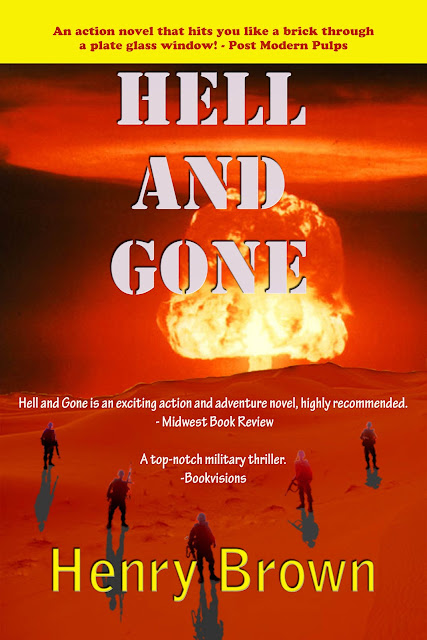 As we grow closer to the release date of my latest men's adventure novel, Tier Zero, and I scramble around getting the coolest blog tour ever ready to go, I thought I'd take a look back over the bloody battlefield of my burgeoning fiction career to the opening shot, so to speak: my debut novel, Hell and Gone.

Above is the paperback's cover image. All but one of the surviving protagonists from that bloody shoot-'em-up are back for more madcap mayhem in Tier Zero.

Here's a bit of trivia for you: The original title was The Has-Beens. I liked it. Nobody else did. I changed it to The Samson Doctrine. People liked that, but it sounded too techno-thriller for me. As the original publication date loomed closer, I argued myself in circles about those two titles. Then I pondered what else I could call it.

It was an old-school commando tale. I figured a title that sounded old-fashioned would clue potential readers in on what sort of novel this was. I wrote about a dozen different blurbs for it, hoping a title would come to me before the deadline for publishing. While working on another blurb, I was summarizing what's at stake. Rocco and the gang had to steal a suitcase nuke away from Khaled Ali and his martyrs-in-training before they used it to blow Tel Aviv to...

(Here's where I thought: "Eureka! Herein lies the inspiration for a title!")

Smithereens. Nope. Although it would work well as a title of a comedy, or Clancyesque thriller spoof.

Kingdom Come. Hmm. I was getting warmer, but was sure that title must have been used a thousand times already.

And then it came to me. It was different. It was old-fashioned. And it sounded like something protagonist Rocco Cavarra would say. Bingo. I had a title, literally just a couple days before it was printed. (Yes, the print version came out first--another mistake I've learned from. Of course, I knew nothing about e-books at the time, so cut me some slack already. Okay?)


Anyhoo, there is a brand new Amazon review of H&G, and some others I have not yet shared on the blog. So let me correct that, now:

Military fiction done right.,
By
Winston Crutchfield "MindSpike" (Indiana, USA) Amazon Verified Purchase
This review is from: Hell and Gone (Kindle Edition)
In the tradition of "The Expendables" and "The Dirty Dozen", Hank Brown delivers rock solid military action with just a hint of techno-thriller. Brown paints "Rocco's Retreads" with a solid brush that emphasizes gritty, realistic action instead of a troop of invincible soldiers. The fighting is brutal and intense; the characters are recognizable and empathetic. The language of the book is noticeably less crude than one might expect from this type of military fiction, which makes the book that much more enjoyable. The plot is straightforward, and complications derive from perfectly natural mission-creep rather than complexly contrived circumstance. Brown stays on target and develops his characters and story without resorting to vulgarity, graphic violence, or gratuitous sex. This is a book about experienced soldiers on a dirty covert op; the writing is well-rounded and professional. I enjoyed reading this story, and immediately went looking for the author's blog (do a quick search for "two-fisted blogger"). Henry "Hank" Brown is definitely an author to watch.
Great Read - Fast moving Military Fiction,
By
J. G Scott (United States)

Amazon Verified Purchase
This review is from: Hell and Gone (Kindle Edition)
I am a reader who likes military fiction and have found the field pretty sparse for quite a few years. I look for believable action, realistic characters and straightforward moral clarity - the next "Dogs of War," but relative to the modern world of instability.
Hell and Gone gives the reader all of it - and the style is so smooth it can be easily read in an afternoon, it was that good that I could not put it down.
The work starts by setting the scene for the twisted antagonists (they are truly sick) - just enough detail to whet my appetite and move us along to the good guys. It is very believable and makes me wonder if the author has seen something like the terror camp described....
The good guys are not supermen - they are men with faults but have innate clarity that allows their leader, D. Cavarra, to prove his mettle. The author takes just enough time to give us some insight into each characters inner workings - enough that we want more from those who survive. The various characters have to be a microcosm of any small unit out in various nasty parts of the world - from the bumbling wannabe goofball to the quiet man of many virtues, with a couple of intriguing twists.
The location looks to be prime, who could argue against the Sudan, and with a hint of Isreali intrigue the stage is set for a good tale. Scary in it's implications for nuclear holocaust but very relevant and even takes some time to poke back at inadequate leadership in DC!
No spoilers here - except when I put the work down - I could only say "sequel/prequel?"

This review is from: Hell and Gone (Paperback)
Look at these reviews. Have you ever seen reviews this long? Readers care about this book, and the reviewers have deconstructed it. So I will stipulate what they have said, that it is well-written, well-plotted, and has excellent characterization, which is hard to do when you have a military unit worth of characters to delineate.
The first fifty pages introduce the main characters and the mission, and they are interesting in themselves. After that reading this book is pretty much like being strapped to a rocket for about three hours. This is high praise for an adventure novel. The sucker moves and carries the reader with it, fast and smooth.

Nobody73 "D.R. Tharp" (Missouri)
Amazon Verified Purchase
This review is from: Hell and Gone (Kindle Edition)
I had this book on my 'must read' list for awhile. I should have read it earlier. I read it in 3 sittings and it went by extremely fast. I really love the characterization in this book. Anyone who has served in the military will be jolted back to the service by reading the cast's resume and the way they do things. Even if you never served in Combat Arms, the people are the same. They range from Solid Officers who aren't afraid of work to the bitter angry socio paths who try and maneuver their way through 20 years and along the way they try and screw Anyone and everyone they can. Obviously, the author has been there and done that.

At first, I thought the plot to be a typical hadji hunt. The author has done a great job at assembling a mission that you might find anywhere and drags you into the depth of the characters. God, The Flag and American Pie, this is not. And I love it. The sequence of events in the last 2/3's of the book are extremely unique. I won't give away the plot of the book as it has been discussed above. Mr. Brown has a talent that I wish he would put to more novels of the military adventure class. This book is worth the time and price and then some. Do yourself a favor and spend the time getting to know the characters of this book. Bravo!

A man's book through and through.,
By
Jack Silkstone
Amazon Verified Purchase
This review is from: Hell and Gone (Kindle Edition)
I read Hell and Gone over three days on my Iphone. Every opportunity I had I read it, on the train, at the barbers, waiting for physio, sitting in the park whilst my do burned off energy even waiting for a meal in an expensive restaurant (oh my girl loved me for that).

I couldn't put this action thriller down. Why? Because it grabbed me in the first few pages and didn't let go till the very end. It has it all, it's contemporary, it's well developed, the plot is solid, the weapons and tactics are spot on and the writing style is easy to read and doesn't bog down in to much detail.

There is a lot of independent crap on Amazon but this ain't some of it. This is an exceptionally well produced piece of action writing that any major publishing house would be proud of. Not that I think that all of their work is worth being proud of.

So why only four stars? Well I think that there was a few to many characters in the team. At times I found myself confused as to who was who and what background they had. I think the book would actually read better if the number of good guys was halved.

All in all a great read that I recommend to any man who likes real action.

There are some more I haven't shared here before, but this post is already getting kinda' long. (Of course you're more than welcome to read them all on Amazon prior to buying about four million copies for friends and family all over the English-speaking world. What? Not quite four million? Quit being so unsociable and start sending some Facebook friend requests!)

When we meet again, Two-Fisted Bloggees, it will be time for the Men's Adventure Blog Tour, kicking off Monday, January 14 2013, after I pull the trigger on Tier Zero!