A Night at the Fights 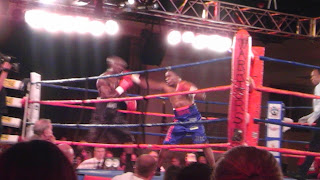 I don't watch sports that much anymore. I blog about them even less. For the last two seasons the only football game I watched from start to finish was the Superbowl. Boxing and UFC? I just don't sacrifice the time like I used to. But yesterday I was invited to a fight card at the A La Carte Event Pavillion in Tampa...and it proved too good an offer to turn down.

I knew nothing about any of the fighters on the card--partly because I haven't followed boxing for so long; partly because none of them were "name" fighters. Most were fairly new to the sport, though there were a couple veterans who just never climbed very far up the rankings.

But the matches were real crowd-pleasers. Out of 11 bouts, only three went the distance. The 12-round main event was one of those three. As you can expect with so many stoppages inside scheduled four and six-round fights, the action was thrilling. 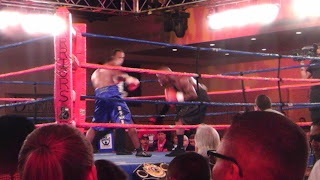 My biggest complaint was my seat--though closer than I've ever been as a spectator, I was facing the corner post, which blocked my view frequently. I missed no less than three knockdowns because of that stupid post. And though the bouts were being recorded for Telemundo (which means that most of the announcing was done in Spanish and I couldn't make out the fighters' records or weigh-in numbers), there were no big-screens present, hence no instant replays.

Because I knew his manager, I paid close attention to Charlie Serrano's featherweight match against Juan Cruz. And videorecorded the first round on my phone. Despite being one of the three that went the distance, this was a real donnybrook. Holy life-imitates-art, Batman! I find it hard to describe what I saw without sounding like I'm plagiarizing from my Fight Card novella, Tomato Can Comeback. I'll just say that Serrano was a superb fighter--great speed, power, footwork and aggression. If Cruz hadn't been so incredibly tough (probably too tough for his own good), he would have gone down for the count. And Cruz was a southpaw, which confounds most conventional-stance boxers--but Serrano had no problem with him (other than Cruz's head made of solid chromium steel, that is).


At least the judges seemed to be on the up-and-up, as every decision went to the pug who truly won.

Another pleasant surprise for me was heavyweight Jason Barnett, who scored a blood-splattered TKO. I was impressed by his poise. He demonstrated a solid defense, some adroit counterpunching and good power. His left hooks ripped his opponent's face into raw meat and the doctor had to stop the fight. What stank to me, though, was that three times in a row the doctor waited until after the bell rang for the round to start before he examined Terrance "Big Jim" Marba, and Barnett had to wait in a neutral corner while the seconds ticked by. Like somebody had made a deal with the doc to buy Marba some time--time for his head to clear and his legs to solidify; time stolen from Barnett, who could have used it to finish his man sooner. Maybe nothing crooked was going on, but I'd have been pissed if I was Barnett.


Then there was Rad Kalajdzic, a light-heavyweight from St. Pete. Again, I've never heard of him, but he's got quite a following around the Tampa/St. Pete area, evidently. Trust me when I say most of the people in attendance came to see him, and not the main event between flyweights Glen Donaire and Omar Soto.

Here's something I don't understand: tickets are not cheap, and the place was supposedly sold out. But probably a quarter of the seats were never occupied, and a third of them only sporadically. A good portion of the crowd missed some great action because they were getting in and out of their seats for drinks (conspiring with the cursed corner post in further obscuring my view), or standing around hobnobbing, or engaging in screaming matches with other spectators. Why did they even bother coming? They obviously weren't boxing fans. 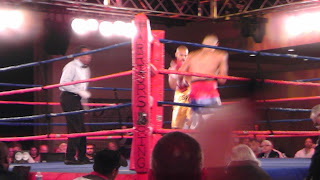 Well, when Rad Kalajdzic stepped inside the ropes, people finally took their seats to watch, and roared to raise the roof. Lucky for them they paid such close attention.

Shannon Anderson, a Phillidelphia fighter, pounced on Kalajdzic at the opening bell and swarmed him with combinations from every angle. He either wanted to blitz him with a flash-knockdown, or firmly establish who was going to dominate this fight. For a few moments it looked like Rad might be in serious trouble. He wasn't hurt, yet, but he looked dumbstruck--not offering much of a defense and unable to mount any offense, either.

But Rad weathered the storm and overcame the shock of that furious attack, soon revealing why he was so popular. At 1:36 of the first round he scored the only true knockout (not a TKO) of the night. It happened too fast (plus there was the verdammt corner post in my way) for me to see what actually put Anderson down, but he absolutely crumpled, hitting the canvas face-first in a contorted twist, actually unconscious while counted out.

Not that I need inspiration for any more projects right now, but I got plenty last night. I was already playing with the idea for another Fight Card book. Hmm. We'll see what happens.
Posted by Hank Brown