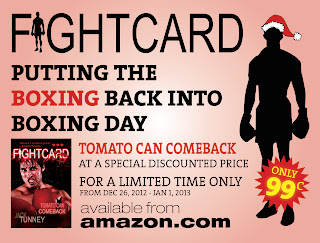 So far as I know, Boxing Day is a British Commonwealth holiday in which people trade occupations for a day. At least that's what I learned from a rerun of M.A.S.H. one night long ago when I was bored enough to watch it. And I don't think it has anything to do with the sport of boxing.

But what the heck. It seemed like a good excuse for a promotion of the Fight Card series. So from December 26 to January 1 ALL the Fight Card books will be available for 99 cents on Amazon. That's an opportunity to enjoy a lot of hard-boiled noiresque pulpy sports fiction for the cost of a proportionate binge on 40-ounce Arizona iced teas.

All the Fight Card authors, myself included, publish under the house name "Jack Tunney." But here's some extra incentive to buy mine: If you buy Tomato Can Comeback, then next time I play Fight Night Round Three, I'll name a character after you and beat the living crud out of him.

What's that, you say? You'd rather have your namesake beat the living crud out of me? Well, that can be arranged. Post an Amazon review and I guarantee your alter ego will emerge triumphant. I'll even adjust the outcome of the fight based on your ranking. One star and you'll barely eke out a decision win and fans will forever question your skills. Five stars and you'll destroy me in a devastating knockout that confirms your cyber machismo to the videogame world.

Is that an amazing deal, or what?