Masquerading as an Action Novel: The Hunger Games 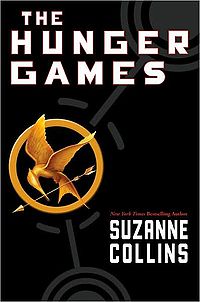 Hello, Two-Fisted Bloggees! I'm pleased to post a review by my first guest blogger tonight. Winston Crutchfield (Mindspike)  is a podcaster and a regular contributor on the Mack Bolan forums. Here he goes:

With the aggressive promotion surrounding Suzanne Collins' trilogy of Hunger Games novels, it seems unlikely to have missed any fan of dystopian sci-fi action novels. Unfortunately, the Hunger Games trilogy only wears the trappings of sci-fi action surrounding books that are rabidly chick-lit - violent chick-lit to be certain, centering on human brutality, gladiator-style duels to the death, and culminating in a brutal urban military action.

Even given the action-novel wrapping, dudes looking for a good sci-fi, adventure, or military series will be too easily deceived by the marketing campaign. While the cover copy depicts the story as focused on the dystopian world and the inhumanity of the Hunger Games themselves, the reality is somewhat different. The stories are told from the first-person POV of a teenage girl, and predictably focuses on those things that a teenage girl finds most evocative.

"The Hunger Games" follows Katniss Everdeen into the Hunger Games, where she must fight for survival against eleven other teenagers. In the process, she comes to know love - thereby establishing the romantic triangle between herself, her friend the violent hunter, and the sensitive baker who becomes her partner in the Hunger Games. In "Catching Fire" Katniss struggles to pacify the ruling government in order to keep her family safe while she sorts out her feelings for the two boys in her life. When she goes back into the Hunger Games, she finds her feelings a source of conflict between team members in the Games. In "Mockingjay", Katniss spends the majority of the book in a state of emotional confusion, finally showing up for the climax in an emotionally charged, but physically unsatisfying conclusion. I don't feel it spoils anything to say that this book ends like most other chick-lit, with the heroine happily married and raising children.

While "The Hunger Games" reads quickly and easily enough, the remainder of the trilogy doesn't concern itself with the physical action, the political reality, or the actual process involved in rebellion and revolution, focusing instead on the feelings of the characters and how they respond to a government that actively oppresses them and a rebel leadership that cannot be trusted. If the setup sounds too good to be true for a bestselling action-adventure series, it is. This isn't really a series written for dudes. Even though it claims to be.

My thanks to Winston for this thoughtful analysis. It certainly has informed my opinion.
Posted by Hank Brown