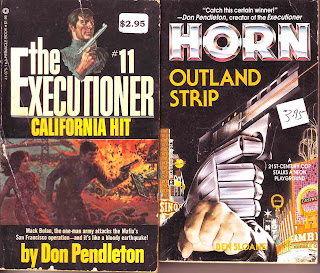 Recently, work-related travel has not brought me near any public libraries for which I have a card. However, for a few days I passed a roadside used bookstore in a rural area. On my very last trip that took me past it, as it turns out, I stopped by to see if they had a copy of The Sergeant #3: Bloody Bush so I could be the first one on my block to own the whole collection. It's almost impossible to find men's fiction in the chain stores (because so little of it is still being traditionally published), but I thought maybe I'd have at least a chance at a place like this with a painted plywood sign.

I walked inside, steered past the obligatory romance section (from which such places probably get 75% of their business), found sci-fi, bounced over to westerns, then, about 2/3rds back on the right I found the men's fiction section. 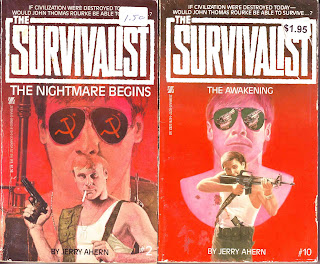 And what a section it was! A shelf-and-a-half stocked with testosterone-tainted treasure. I didn't find Bloody Bush or any other Gordon Davis (AKA Len Levinson) titles. Nor were there any Mac Wingate installments, though there were a couple of John Mackie's (AKA Len Levinson) Ratbastards. But they had some series that were only a few books away from being complete collections. Having heard about Ahern's Survivalist series but never having read it, I grabbed 2 samples of it. The shelves were sagging under the weight of the Executioners, Bolans, Stony Mans, Able Teams and Phoenix Forces! I picked up an early Executioner, wanting to read one of his Mafia Wars titles.

There were some series and stand-alone titles I own, but a lot more I've never been exposed to. If I was still single, I'd have gone crazy. Relatively speaking, maybe I did go crazy. 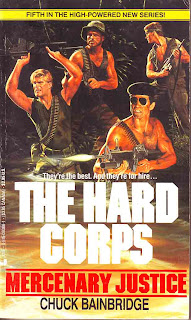 Every now and then I get a hankering for some '80s-style paramilitary pulp. So I picked a few of those off the testosterone tree. 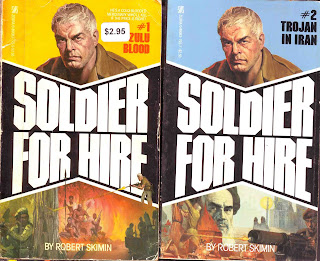 I wish I'd had time and an internet connection so I could consult www.mackbolan.com and Jack Badelaire's Post Modern Pulp forum to inform my buying decisions a bit. I feel confident about the Pendelton and Ahern titles, but I have no clue what quality the other stuff is. I also don't know when I'll get a chance to read these. But when I do, 2-fisted blogees, you can bet I will spout off my opinions about them.

This place was a literate caveman's Nirvahna.