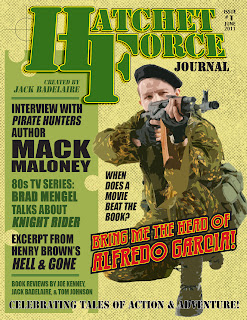 I'm excited to announce that the first issue of Hatchet Force Journal is now available in the Amazon Kindle store. Jack Badelaire, the blogging mastermind behind Post Modern Pulps, put this periodical together with the help of other fans and writers of men's fiction, action adventure, new pulp, post-modern pulp, dude-lit...whatever you prefer to call it.
I can't think of another publication like it, though some of the comic fan-zines had a similar focus on their chosen medium. But it doesn't just cover fiction--Jack is keeping flexible. There are films and TV series discussed in this issue, and I believe there will be articles about firearms and military subjects in the future.
Here's some info about the contributors to this first issue, lifted right from Hatchet Force:
Jack Badelaire received his degree in Film with a minor in Classical Studies. He currently
works in Higher Education Technology. His hobbies include collecting single malt whiskys and
knives, military history, and of course, reading paperback action-adventure fiction. You can
find his blog at postmodernpulps.blogspot.com.
Tom Johnson is a former US Army military policeman and a long time champion and author
of pulp fiction. He has also contributed to a number of non-fiction works as well as several
anthologies. You can find Tom’s blog at pulplair.blogspot.com.
Joe Kenney hails from Dallas, Texas. His ability to consume vast quantities of lurid, violent
paperback fiction remains unmatched in the history of mankind. You can find all of Joe’s many
reviews over at his blog: glorioustrash.blogspot.com.
Mack Maloney is the author of several dozen novels, most notably the Wingman series of postapocalyptic adventures. His latest series of books is The Pirate Hunters, and Mack recently
released an album, Sky Club. You can find Mack at his website, mackmaloney.com.
John Mayhem and Jack Badelaire survived the bloody trenches of film school together and
have been fast friends ever since. An avid hunter and outdoorsman, Mr. Mayhem works as a
Digital Archives Manager specializing in film and television collections.
Brad Mengel is a long-time scholar of action-adventure movies, television, and fiction.
Brad wrote the excellent reference book Serial Vigilantes of Paperback Fiction, a must-have
for anyone doing significant research on the subject. You can find Brad’s blog over at
my.opera.com/AggressorBrad/blog.
There's even some two-fisted material provided by yours truly.
There's an interesting examination of that maniacal maven of movie violence from the Vietnam era, Sam Peckinpah, and his most definitive film; a discussion of the evolution of the pulp fiction from the golden age into the adventure paperbacks of the 1980s; and a review of Able Team #1 to name just a few.
I found the interview with author Mack Maloney an unexpected treat. Friends of mine back in the day read his Wingman series but I never did. After reading his comments, I'm stunned by how similar his creative seed was (for that series) to my Barbarian Nation series. Aside from the type of aircraft, I'm sure our execution is markedly different, but with the knowledge that his characters are also pilots who build their own hot rod planes, in a post-apocalyptic future, the series just went up a couple notches in my estimation.
I've been longing for a resurgence in dude-lit (or whatever you prefer to call it), and am beginning to find reason to hope one is underway. The Hatchet Force Journal is one tangible exhibit of that hope.
Posted by Hank Brown