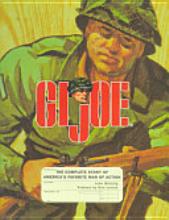 My experience with GI Joe goes back to the age of five. Somebody bought me one for Christmas or a birthday--a 12 inch plastic dude with a scar and a beard in an orange jumpsuit. The box he came in told me he was a smoke jumper, but a picture on the box showed him in a different uniform carrying a medical bag next to a toy ambulance, so I knew he was a paramedic, too. Having no knowledge of word or phrase origins at the time, I simply accepted that "GI Joe" meant a scarred, bearded, smoke-jumping paramedic.

When my big brother explained what smoke-jumping was, I decided to make a parachute for Joe out of some of my mother's yarn and plastic from a bread wrapper. As a feat of engineering, my effort was a bust. That brilliantly designed parachute just wouldn't deploy, no matter how many times I chucked Joe into the air . And that's how I lost him. I found him again later, but the dogs had found him first. Joe was a hideously mutilated wad of peach-colored plastic. So ended my hands-on experience with GI Joe.

About 10 years later I still hadn't quite become fascinated with word and phrase origins, but I did have a keen interest in history and popular culture from bygone ages. I was also on my way to becoming a World War II buff. So I was starting to read the term "GI," always in military contexts, and accepted it as just linguistic coincidence. But then, when reading about war movies, I came across a review of one titled "The Story of GI Joe." The review (with some production stills) convinced me that this was a film set in WWII about the rigors of combat. I couldn't, for the life of me, imagine how that scarred, bearded, smoke-jumping paramedic in orange coveralls could be the star of such a film.

My epiphany came while reading a Silver Age DC comic from the days of Batmania. I encountered a full-page ad about GI Joe, who, in those black & white days of yesteryear, was a real, honest-to-gosh GI! My first reaction was, "Aha! No wonder he's called GI--that's what he was before he grew a beard, put on an orange jumpsuit and became a smoke-jumping paramedic." My next reaction was, "Cool! Why couldn't he have been a real GI back when I still played with toys?"

The ad photo showed Joe in uniforms from every branch of service, and I thought they were all nifty. The soldier and marine were decked out for combat (the marine had a camo cover for his helmet while the soldier did not--WWII was still THE conflict that came to mind when the subject of war came up back then, I guess) with rifles and web gear; the sailor had his snazzy crackerjack outfit on, and the Air Force Joe had a flight suit on, oxygen mask, etc, and was climbing into a scale model fighter plane. Man, all the imaginary heroics I missed out on!

Many years later Hasbro released some throwback Joes--not the little two-inch (or whatever) fantasy characters Hollywood recently made a movie about, but 12-inch, fully articulated fighting men from specific units...some were even specific servicemen (like Dorrie Miller, complete with anti-aircraft gun at Pearl Harbor, on his way to earning the Navy Cross). Try as I might, though, I couldn't justify to myself spending money on any of that. What I did spend my money on, though, was this book that tells Joe's story.

One of the guys at Hasbro got to reading an encyclopedia, and his son became fascinated at all the different medals listed therein. That's where the seed was planted. Toy soldiers have been around probably as long as real soldiers have, and now at Hasbro, plans went forward to develop a toy soldier for the 20th Century.

One of the toy Moguls involved in the Barbie line lent them some business advice that stuck: "First you sell them the razor, then they have to keep buying the blades." Or something like that. With Barbie, little girls got the doll one time, but turned Mattel into a toy empire buying accessories for it (different clothes, purses, doll houses, etc.). This was a perfect strategy for Hasbro, too, since Joe could be any flavor of GI a boy wanted him to be: deep-sea diver; scuba diver; pilot; astronaut; grunt with rifle; submachinegun; flamethrower... And speaking of Barbie, Hasbro was adamant that their new toy was for boys, and should never be called a doll. This is when, where and how the term "action figure" sprang into the American vocabulary.

I chuckled when I read how Hasbro settled on his name. There were only three TV stations to choose from in any given city back in the early 1960s, and it turns out that during the period when they were agonizing over a name for their serviceman, one night, with no planned coordination among them, the members of the Hasbro think-tank all wound up watching the same movie: The Story of GI Joe. The next morning, they unanimously decided to adopt Ernie Pyle's (the movie was based on his war correspondence) catchy euphemism for their entire "action figure" line. In a cockeyed way, this part of the tale gave me a sort of personal connection, having read about that film years before and pondered the title.

There are many interesting tidbits revealed in this book, like how Joe's backward thumbnail came to be and why they kept it; how they designed his face; and how they staged that picture of the fighter plane I mentioned above. The reason behind Joe's transformation from a GI into a smoke-jumping paramedic in the 1970s is explained in the book, though hardly a mystery to anyone who knows anything of those times. It can be summed up in one geographical name: Viet Nam. (And had Joe not burned his draft card, grown a beard and put on an orange jump suit, my mother probably never would have allowed me to own such a toy. So Hasbro's demilitarization was a wise move, I suppose. Sigh. Pragmatism...)

The book takes Joe up into the fantasy paramilitary organization of the 1980s, complete with cartoons and comic books, and it's all an interesting read if you have an interest in toys, business marketing, or pop-culture.

In many ways the evolution of GI Joe mirrors the mental journey of the boys who first played with him. Their fathers and uncles had saved the world from the Axis in "the war" (WWII), and as children they idolized fighting men, and thought it great fun to simulate war in their bedrooms or back yards. Then they saw their big brothers drafted and sent overseas to kill and die for a cause nobody could, or would, define. When big brother came home, it wasn't to tickertape parades and universal gratitude from the folks on the home front, but to Marxist protestors spitting on them, calling them war criminals, baby-killers, murderers. Often big brother came home in a wheelchair or a body bag.

I won't go into all the cultural conditioning undergone by the baby boomers. There was a lot of it. But between that and the natural process of maturation that transforms men in every culture, war ceased to be an opportunity for unlimited adventure, and became a gruesome, smelly nightmare. The military went from an being an honorable profession and a patriotic duty to a brutally half-witted dictatorship dedicated to crushing personal liberty. (I suppose there's some truth in all those perceptions.)

GI Joe probably came on the scene a decade too late for his own good. Yet his is a household name, connoting different images to different people and different generations. To Ernie Pyle, GI Joe was an everyman in uniform, a regular Joe (pun intended) thrown into the trenches to fight for his life. To the young boys of the 1960s, GI Joe was a cool, heroic warrior, fighting in noble conflicts of whatever scale their imaginations dictated (and whatever accessories their parents could bankroll). To my generation, he was a smoke-jumping paramedic with a beard, an orange jumpsuit, and Kung Fu Grip. To later generations he was a member of a secret paramilitary government organization thwarting COBRA's quest for world domination. In my opinion, the later incarnations merely hijacked the brand name, and bear little resemblance to what GI Joe was intended to be.

There's a whole lot of cultural commentary Joe could make after studying America through his plastic, painted eyeballs, too.

Some men remember  the true GI Joe fondly. Some despise him because of what they feel he represents. But wind the clock back far enough and he was a loyal comrade, indefatiguable personification of their own warrior spirit, or an imaginary friend, to almost all of them.