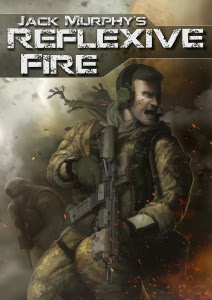 Since the early 1990s, men's fiction has dwindled to almost nothing. Critics of the genre will point to the abysmal writing in some of the titles during its heyday. I have reason to hope for a resurgence in men's fiction that the critics of the genre won't be able to dismiss easily. I say that because of well-written, hard-hitting novels like Reflexive Fire.
The hero is everything you could hope for in an action-adventure--intelligent, charismatic, honorable, a combat veteran from an elite unit, and just slopping over with badassity. We meet Deckard during a guns-blazing rescue of some POWs from a covert operation gone SNAFU. From there, a mysterious rogue on the ragged fringes of the intelligence community hands him a deep cover assignment as a mercenary commander for Soros and Kissinger-esque insiders from the shadow government. Pretty impressive that these Princes of Darkness can be duped, with the resources at their disposal. Still, Deckard's cover could be blown at any moment.
Deckard organizes and trains a private army on the steppes of Kazakhistan, and leads them on direct-action missions at the behest of his sinister bosses, while tapping into his own substantial resources to find out what these puppetmasters are really up to.
There is no shortage of action in Reflexive Fire. The main characters are warriors, and fighting is what they do. Having winced, groaned, rolled my eyes and gritted my teeth at many authors' attempts to depict military (or paramilitary) operations, it was really satisfying to read a military thriller written with this level of technical accuracy. Afterwards it made me want to have a cigarette and raid the fridge. And I don’t even smoke.
I've learned to avoid political thrillers, and ordinarily wince, groan, roll my eyes and grit my teeth when the author of any novel starts to portray their naive concept of how back room politics play out. This was another pleasant surprise for me. The author bypasses the two-party good-cop-bad-cop charade to tickle the truth hidden behind it. A few years ago, to even mention the workings of the shadow government was to invite ridicule and worse. Maybe this has changed as certain evidence becomes more difficult to hide. Still, I admire the author's courage to reject the blue pill publicly.
I don't know if this should be considered authoral courage too, but Jack Murphy isn't afraid to let important characters get snuffed in all the spray of shrapnel and deluge of full-auto fire. The body count is high, but not gratuitous. The progression of the plot is both plausible and logical. It is hard to imagine, though, how the stakes could be raised much higher in a sequel.
It's not very common to discover an action-adventure author who is also a SpecOps veteran. When you do, unfortunately, the quality of the fiction usually leaves something to be desired. Richard Marcinko was a competent SEAL team commander, but his Rogue Warrior series is “un-sat” IMHO. Barry Saddler was respected in SF, had a decent singing voice, and I'll even admit his Casca series was a neat idea, but after struggling to plod all the way through a couple of those books, I found myself asking what the point was.
Jack Murphy has not only done some of the same types of things he writes about, but he has consolidated them into an intelligent, entertaining novel. And Deckard is a character with plenty of juice for more shootouts to come. I highly recommend this book.
It is out now for the Kindle, and soon to be in paperback. Please consider buying it through Jack's blog, Reflexive Fire, from Amazon, so the author gets to keep a little more of the fruit of his work. I hope to interview Jack about this novel in the near future, so stay tuned.
Posted by Hank Brown