When in Rome, Don't Capture an Ape Man 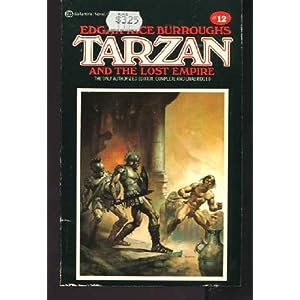 Coming out soon is a film version of John Carter of Mars, but up until now, pulp writer Edgar Rice Burroughs' most famous character (especially on the big screen) has been Tarzan the Ape Man. Between all the movies, TV shows, comic books and Burroughs' own stories, Tarzan is a household name and most people have at least some idea what he's all about. This volume in the Tarzan series appealed to me because I've got a soft spot for lost civilization tales.

The jungle lord is approached by one of his civilized (European) friends, and asked to search a vast canyon where the guy's son, Erich Von Harben, is believed to have disappeared in search of a "lost tribe of Israel." What Von Harben found instead were two rival Roman city-states, perfectly preserved since the canyon was colonized in the 1st Century. Not a bad find, actually, and Von Harben also discovers love at first sight with a noble Roman girl, as can only happen in a classic pulp. But alas, not everything is sunshine and puppies in this anachronistic canyon, and Von Harben finds himself in prison due to corrupt politicians and their paranoia.

Tarzan, who entered the other end of the canyon, has also suffered a mishap that landed him in prison in the rival city-state (one is Castra Sanguinarious and one is Castrum Mare). Both Tarzan and Von Harben find allies among the political prisoners in their respective cities, but time is running out for the Ape Man to rescue Von Harben before the tyrannical Caesar has the suspicious outsider killed for sport in the arena.

Burroughs was fairly enlightened for the time in which he wrote (the first edition of Lost Empire was printed in the 1920s), but I still cringed a bit at the underlying attitude toward black Africans. You've got to take those factors into account when you read something this old. Something else I struggled with were the names. So many characters had authentic-sounding Roman names my head was swimming trying to keep track of them. Another annoyance was due, I think, to the fact that this book was originally written as serialized pulp--each episode a given length according to the requirements of the periodical it was written for, with a cliffhanger ending to be continued next issue: Tarzan came off almost skitzophrenic due to his changing opinions about whether he could escape and when he should attempt escape, etc. And one final criticism I'll offer is that for a pulp tale about a feral savage raised by gorillas, in an adversarial position vis-a-vis hordes of sword-wielding legionaires, there wasn't nearly as much action as you might expect. And what action there was disappointed me a bit--particularly in the arena.

I must give credit where it's due, though: when Tarzan is paired against a gladiator, his goose is cooked until the fortuitous intervention of a newfound Roman friend. Tarzan is a bad dude, but not invincible. He can't match up against a master of single combat who lives or dies by the sword just because he is the hero of the story, knife or no knife; ape-like agility or no ape-like agility. Weapons and all other factors being equal, the only individual who could have stood a chance against an experienced gladiator was another experienced gladiator, and Burroughs knew this. Thank-you, Edgar. No eye-rolling from me on this aspect.

This concept had heaps of potential, but fell a bit short in my opinion. I still hope to read Tarzan and the Ant Men some day.