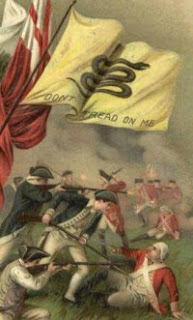 No, I'm not referring to that summer blockbuster from 15 or so years ago. I'm not reviewing today, just taking a minute to express my appreciation for this country.

There's a lot wrong with America, and more all the time, but there's still more people trying to get in than get out. This was even more true in previous generations, when our uniqueness was even more pronounced. What escapes the intellect of those who want to make America more like other countries is that, as you do, it begins to have the same drawbacks as other countries (we become "unexceptional," in a word).

There's a popular assumption, sometimes spoken, sometimes not, that the United States of America was (or is) a racist nation, because some states allowed slavery prior to 1865 (and because people who live here are free to believe and speak as they choose--including racists). Slavery was a reprehensible practice, imported with the Europeans who settled on this continent long before we became a nation. But we fought a war to end it--the most costly war in our history, measured in American lives lost. And if you want to look at numbers, there have been far more people of color who came from Africa to settle here of their own free will than ever came across on slave ships.

There's nowhere else I would have rather grown up. And nowhere else I'd have a better chance, now. Sure, I'd have more money if I was born into the ruling class of some other nation. But I'm a working stiff, born to regular people, and even though I've bobbed from middle class to lower middle class all my life, I've had it pretty good compared to other folks around the world.

The reason so many have had it so good here for so long is because some individuals in the 18th century had the intelligence to design a unique system of government; the courage to fight for it, and the moral fortitude to keep fighting when the going got tough.

I couldn't care less about firecrackers, or if I see any fancy rockets bursting pretty patterns in the sky. In a time when our independence is more threatened than ever, I thank God for what I have enjoyed and still enjoy. Freedom has a price. I'm thankful for the men who pledged their lives, their fortunes and their sacred honor for the cause of liberty that Americans have benefited from since then.
Posted by Hank Brown