Say hello to my little friends... 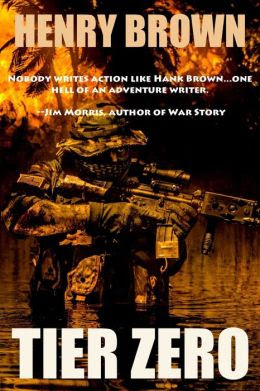 Remember the unapologetic literary mayhem from the glory days of men's adventure paperbacks in the 1980s? Well, those days are back, only better, and we're going to celebrate that for the next two weeks. You are invited to the online traveling party.

We're gonna tour the World Wide Web, stopping at the very coolest blogs for guys who like books for guys. Through these blog stops, you're probably gonna discover some great reads by authors you haven't yet been introduced to. As a bonus, while surfing the blogs you just might find the lowdown on that movie you were wondering about, videogames, guns, military gear or other cool guy stuff. You never know with a motley assortment of miscreants like the bloggers in my network.

But back to the reason for this epic explosion of virtual testosterone:

Tier Zero is a present-day throwback to all that was good about the men's fiction of yesteryear, and a sequel to the military thriller Hell and Gone which Jack Silkstone (PRIMAL) calls "a man's book, through and through." In this guns-blazing sequel, Tommy Scarred Wolf leads the survivors from Hell and Gone on a rescue mission that pits them against human traffickers, pirates, a typhoon...and that's just for starters.

Each stop of the blog tour takes the participants to the online stomping ground of a fellow blogger who welcomes men's fiction/action-adventure/dude lit/whatever ya wanna call it. The tour runs from January14-30.

January 14: The Two-Fisted Blog (You are here!)

January 27: Sharp End of the Spear

January 30: Wrap-up right back here on the Two-Fisted Blog!

I'll see you on the next tour stop!