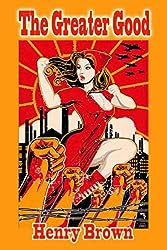 Anybody remember Mad Magazine back when it was funny? Hmm, probably not. Well, anyway, it was hilarious once upon a time. How 'bout the early movies of Mel Brooks and the Zucker Brothers? (Young Frankenstein, Blazing Saddles, Airplane, Airplane II) Get the picture now? That gives you an idea of the type of humor to be found in this short political satire. But it's not from the typical/obligatory left-wing perspective--quite the opposite.

Well, hmm. It's written as if it is, in fact, from the typical/obligatory leftist/feminist/homophile slant, but with razor sarcasm that lampoons the typical Marxist (usually called "liberal"), feminist and white knight memes, tropes and so-called logic. It's free for a couple days.