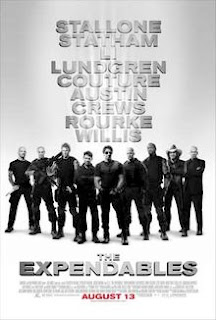 Okay, it took me longer than I planned, but I finally saw it. The secret to enjoying this testosterone-laden flick is to not take it too seriously. Don't look for any profound messages--there weren't supposed to be.

The script was like a fusion of Megaforce and some of the paramilitary adventure fiction from the 1980s. You know--that decade when the big name actors in this cast (Stallone, Swarzenneger, Willis, Lundgren, etc...) were lighting up the box office with huge Hollywood explosions. During a recon for some merc work in a Third World dictatorship, Sly Stallone and Jason Statham inadvertantly befriend the altruistic daughter of the dictator before making a grand exit from the nation and basically saying (with actions-speak-louder-than-words panache), "take this job and shove it."

But back stateside, Sly has an attack of conscience about leaving the fair damsel (Giselle Itié) at the mercy of the dastardly despot and his Evil Capitalist Puppetmaster. He's going back in to get her, doggone it, alone with no plan. But even Sly might have trouble taking on an entire nation by himself, so his merc buddies come along for the pyrotechnic ride. Jet Li, the most mercenary of these mercenaries, is the first to put friendship before money and commit to stick with his comrade come napalm or high pungis. Now you have an adequate excuse for a martial arts shoot-em-up Hollywood Fireball Fest, and director/star Stallone delivers, big-time.

I was expecting it to be far more obvious tongue-in-cheek parody of the genre, but they took a slightly more marketable route, ensuring it's not SO stupid that young adults wouldn't like it. But it's got just enough stupidity, delivered with such finesse, that I had a grand ol' time and laughed out loud several times.
The martial arts segments would have been much more pleasing without all the avant garde camera work, and I could have done without all the close-ups on Stallone's jewelry. But there was a little bit of everything for action flick buffs: A smorgasboard of cinematic fight scene superstars who all get some thumping time; a car chase in which a beautiful old fat-fender stepside hot rod pickup gets shot and smashed to pieces; more exploding ordinance than the Falklands campaign; and some gratuitous gore that is either horrific or hilarious, depending on your mood and personality disorder.

Once upon a time, I fantasized about making a mindless action flick with a cast like this...but when they were all a little shorter in the tooth. Along with Sly, Arnie and Dolph I would have cast Norris, Bronson, Eastwood, Van Damme, Ventura, Weathers, Fred Williamson and Jim Brown. Can you imagine the mayhem and blood-curdling dialog? If my time machine could go back far enough, I'd draft Lee marvin and Robert Mitchum, too.

This isn't The Dogs of War, nor is it Commando. It's not completely sober, but it doesn't descend into campiness, either. What it can be, if you kick the girls and snobs out of the Man Cave for a couple hours, is a lot of fun.