I'm not as big of an action movie  fan as I used to be, but there are still scenes I enjoy watching over and over again because of the rush they generate. I'm gonna list some here in no particular order. Maybe I'll add to the list down the road. 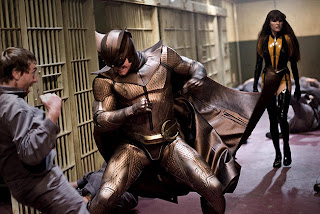 I already discussed this film in detail, but this scene is worth mentioning again. A midget kingpin and his goons show up at Rorshach's cell to exact revenge under the cover of a prison riot. Meanwhile Night Owl and Silk Specter infiltrate the prison to bust their comrade out. Rorshach's calm resourcefulness in dispatching his enemies is inspiring. Night Owl and Silk Specter wipe out an army of rioting prisoners unscathed with bare hands (and feet...OK, and they have gloves on, too) using Matrix-like martial arts techniques. It's all quite incredible, but then, these are superheroes, aren't they?

As one might expect, our heroine attempts escape from the giant gorilla at first opportunity. But there's a lot more than just one danger on Skull Island, and she is quickly trapped by less noble of the island's prehistoric fauna. When Kong arrives just in the nick of time to save her, you may be tempted to kiss the big furry lug. And it's increasingly obvious from this point on that Kong is the hero of this screen version, not the monster (that would be CarlDenham/Jack Black). My apologies for the comical pop-up balloons--I couldn't find an untampered version on YouTube.

THE TRUCK CHASE--RAIDERS OF THE LOST ARK 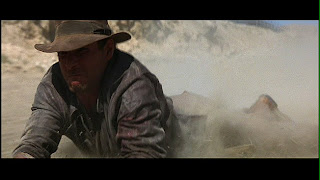 There's a whole lot to like in this retro-cliffhanger adventure flick, but to me this scene defines heroism. Jones' determination and tenacity are larger than life as he commandeers the truck bearing the Ark from a squad of Nazis with two-fisted dispatch. He's shot, beaten, thrown from the speeding vehicle and dragged along the ground at 40 miles-per-hour, all while being chased by more Nazis. But he never gives up until the Ark is under his protection once more. Indie was hard as woodpecker lips.


Spielberg took too much creative license later in the film, I thought, but he sure captured the pandemonium of the Omaha landing as well as anyone could who didn't live through it, probably. Nice hand-held camera work puts the audience in grunts-eye-view. The muted colors approximated the dreary weather conditions (a lull in the months-long showers) of D-Day. Plenty of blood and gore to horrify or gratify. Reivum losing his B.A.R. in the English Channel was a nice touch, as was the magazine-slap against the helmet once he found a replacement. 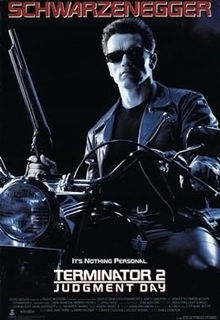 If you can swallow the idea of a liquid metal cyborg EVER being possible, then nothing in this flick is too incredible. Adolescent John Connor (future savior of humanity) is on a dirt bike, being pursued by aforementioned liquid metal terminator in a Freightliner. Pretty doggone intense, already, and the musical score enhances it. Riding to the rescue is reprogrammed old-school terminator Arnie on a Harley, one-handing a lever action shotgun along the way. It's a white-knuckler. 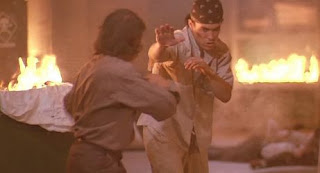 Even in the best fight correography, you'll see stunt men and actors standing around waiting to get hit when it's their turn. I hate that. It happens in this flick, too, but not as blatantly as in some. And nevermind the paper-thin plot. This is an action/martial arts flick with Bruce Lee's son, and the film makers figured that was enough. Toward the end is a hand-to-hand showdown between Brandon Lee and a diminutive Kung Fu master who has played non-speaking combat roles in many action flicks. At the conclusion of this fight scene, the audience applauded. Unless you frequently attend Disney films with large preschool crowds, you probably don't experience that very often.

A tall, svelte Swedish model is witness to one of the "Night Slayer" murders. Cobra (Sly Stallone) has had to thwart one of the two attempts on her life thus far. Now he's escorting her through the city when the Night Slayers strike again. In real life, they'd have bitten off way more than they could chew trying to chase down Cobra's wicked nitrous-snorting V-8 powered '50 Merc sled. But before the obligatory Hollywood destruction of a fine automobile, there is some wild, gratifying stunt driving. My favorite: Cobra has had enough of all the damage to his gun-metal-gray paintjob and, at-speed on a Los Angeles freeway, executes a 180 while jamming into reverse. The Merc is still moving in the right direction, but facing rearward so Cobretti can fire a submachinegun burst at the pursuing pickup truck. Don't ask me why the pickup performs a somersault. With magnificent unbroken rhythm, and still at-speed, the Merc 180s back into the correct orientation and resumes tearing up the freeway. HOOWAH!

Probably the best car chase ever filmed. A Ford and Mopar getting sideways and wreaking mayhem in the streets of San Francisco. There are twists and turns gallore--both literal and figurative. 440 Charger is pretty much stock; 390 Mustang sounds a little hopped up. Listen to McQueen (during his driving shots) bounce all over the valve float before each upshift--what a knucklehead. Suspensions were de-tuned to get more skidding action for the cameras. And of course they had to destroy another superb machine for the finale.

I can't find this clip in its originally compiled form. Basically the Saxon knights get spanked by the Normans in the very first joust. A bad day for all but the ruling elite...until a lone knight arrives, who refuses to remove his helmet and reveal his identity. He counts himself a Saxon, and is asked to strike the shield of the Norman he wishes to challenge. He rides around bouncing his lance tip off every Norman shield in the lists. Needless to say, he accounts for himself very well in the following jousts. Aside from the period-correct trumpet fanfare, there is no music during this scene, yet it keeps you on the edge of your seat quite nicely. Even though the moustache-twirling of the Normans is rather over-the-top.

Oh, how I wish I could find this clip in English. I'll translate some of the important lines:

Ransome Stoddard (Jimmy Stewart) enters wearing an apron, carrying a steak platter. He freezes upon seeing Liberty Valance (Lee Marvin) and his henchmen in the restaraunt.

Valance trips Stoddard on his way by. More guffaws and snickers, then Tom Doniphon (John Wayne) side-steps into view.

Doniphon: That's my steak, Valance.
Valance: (Scared at first, then snickers.) You heard him, dude: Pick it up!
(Stoddard begins to pick it up.)
Doniphon: Pilgrim, hold it! (To Valance.) No, Liberty: YOU pick it up.

This Spanish dub destroys the tension of this scene, which is palpable in the original.

Why an advanced civilization would ever build armored vehicles on mechanical legs instead of tracks or wheels, I can't say. But it makes for a nifty sci-fi action scene with some swashbuckling derring-do.

You're rolling through Tokyo on a speeding bullet train when a man in a suit, wielding a katana (samurai sword) steps into the car and says, "Attention ladies and gentlemen: Dangerous men are coming from the front of the train. You need to move to the rear...NOW!" Ah, the rest is just haiku in motion.

This clip mostly speaks for itself. Australian Ford Falcon with a clutched roots blower (??), hammer-down on the Wasteland Highway. You can see they began the destruction of the best machine early in this movie.

I'm sure I missed some good ones. I'll think of more for a later installment, and feel free to suggest some of your favorites.
Posted by Hank Brown