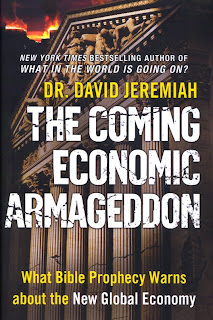 I don't review that much non-fiction on Two-Fisted Blogger. The last such book I did was, I think, Guy Sajer's Forgotten Soldier. But though this book is not meant to be entertaining, it is educational and worthwhile.


Many prophetic scholars (including me, though I'm more of an armchair "scholar") have predicted a catastrophic financial meltdown for decades. Today, many observers inside and outside the Church are grudgingly admitting that we're not crackpots, after all. At least not for that prediction.
In fact, an astute observer who has never cracked a Bible open--but has merely made an honest effort to inform themselves despite the disinformation from government, media and popular culture--understands that the seed of economic destruction for America was planted long ago. That seed has been nurtured, sometimes by a trickle, and sometimes by great spurts. It has been slowed somewhat a couple times, but never stopped. The harvest is almost upon us.
Dr. Jeremiah, whose radio program I've partially caught from time-to-time, has written a book that repeats the warning about this pending harvest given 2,000 years ago.
The first part of the book presents samplings of evidence, from mostly secular sources, about the bitter pill we will soon be forced to swallow. His research has mined some very enlightening quotes to support his other evidence.I appreciated his courage in calling one particular skunk a skunk: Social Security has been transformed into a compulsory, government-run Ponzi Scheme. Politicians and most talking heads are far too cowardly to ever admit this out loud. But while Dr. Jeremiah explains what a Ponzi Scheme is, citing examples, the informed reader will likely come to the same conclusion about Social Security even before he ties it together in black & white. It's also refreshing that he diverges from the ubiquitous "prosperity preachers" in honestly admitting that inflation in particular, and man-made financial calamities in general, widen the chasm between rich and poor while decimating the middle class. Another nice nugget is his analysis of Joseph's management of the Egyptian economy. Some people use this story in Genesis to imply that government-controlled, centralized (socialist) economies are Biblical, effective, or resistant to disaster. David Jeremiah politely takes exception to that notion.
From there, The Coming Economic Armageddon takes us over familiar territory (for those who have read other books about prophecy). Nobody who reads Bible prophecy for themselves is likely to agree 100% with someone else's interpretations, and that was my experience here. But Dr. Jeremiah has a well-grounded education of the matter, in general, and doesn't try to expound upon aspects of end-times prophecy he doesn't yet understand. (Yes, others have, and do, including some of the "big name" prophecy teachers.) He concentrates on the financial aspect of the end times, and the thrust of this is intended as a warning for those who still fail to appreciate the magnitude of this coming disaster.
People who have never read a single verse from the Bible have heard of "the mark of the beast," and perhaps even some contextual speculation about a cashless society, bar codes, RFID chip implants, etc. But they don't appreciate how these developments were assumed 2,000+ years ago in the Bible, and like similar assumptions in Revelation and the other prophetic books, were scoffingly dismissed until the development of satellite communications, the Internet, 3G, streaming webcasts, podcasts, etc., etc., etc.
Perhaps the best treat in store for the prophetically literate is Dr. Jeremiah's chapter on the Millennium. I don't know about others, but I've never heard teaching on this subject, and never read more than perfunctory paragraphs here and there touching on it. It's a pity this period goes unnoticed by prophecy teachers. It is important, fascinating, and painfully revealing about human nature.
TCEA wraps up with a chapter about preparation for the rider of the black horse (look that one up, haha). Dr. J doesn't give investment advice, but advises practical application of the spiritual advice Jesus evidently considered more important than any earth-bound financial strategy.
For those who already have a grasp of end-time prophecy, this is like a review, with a few fresh tidbits thrown in. For those who don't, it's a must-read.
Posted by Hank Brown