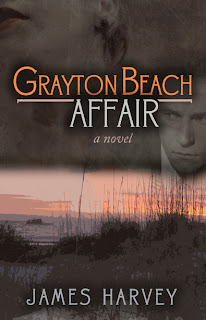 This is the second tour for the Two-Fisted Blog. This time, I'm featuring author James Harvey and his debut novel, Grayton Beach Affair. Here's some details on the author and his book:
Returning to Berlin after being educated but disenchanted with America, Christian Wolfe finds that he and Germany are on a collision course with destiny. Because of his skills in English and knowledge of America, he is coerced by the German military to board a U-boat bound for the Gulf of Mexico to locate and extract a high level German officer imprisoned in a POW camp near the coast. Christian's mission runs smoothly until he witnesses an unusual and violent act by Maggie Neal, a young woman living in Grayton Beach, against a man who had taken advantage of her and her servant. Suddenly their lives collide, resulting in a death and involvement with the local police. He and Maggie discover they need each other to survive. Sparks fly and they have a brief and passionate affair, leaving each with deep but unsettled feelings for the other. Upon returning to France, Christian relies on his instincts when an opportunity arises to reconsider his future. He joins the French Resistance and when he saves an American flyer who offers him a new start in America after the war is over, he seizes it. Arriving in Atlanta, he is determined to find Maggie, but with their relationship founded on death and deception, could they possibly build a future together? 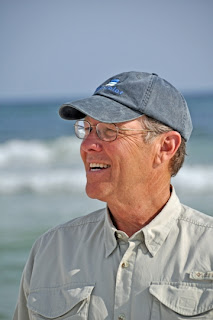 James Harvey was born in a small textile and farming town in South Alabama just a few miles from the town portrayed in To Kill A Mockingbird. His family was a poor, but genteel southern family more resembling a Tennessee Williams story than Margaret Mitchell. Harvey’s grandparents owned a home in Fort Walton Beach, Florida where he spent summers and heard stories of World War II German submarine activity in the waters off shore in the Gulf of Mexico.

Upon graduation from Troy State College, Harvey borrowed enough money for a one way ticket to Key West where he taught for a year at Key West High School. During this time, he fell in love with Florida and especially Key West where he enjoyed fishing, diving the reefs and navigating the local bars. In the spring of that year, Harvey met his wife-to-be, Marie, on a Friday and asked her to marry him the following Monday. He courted her on his only means of transportation - a motorcycle – and they will soon celebrate 43 years together.

Realizing that he would rather be in the jungles of Vietnam than the high school class room, Harvey attempted to join the military as an officer, but due to a military oversight, was given a deferment. He reluctantly left the Keys and began a successful career with IBM, first in Boca Raton and then in Atlanta. During his IBM career, he went to law school in the evening and was awarded a Juris Doctorate in 1984 from Woodrow Wilson College of Law. Realizing that most new lawyers barely make a living, Harvey used his degree to leverage advancement in the business world. After taking an early retirement from IBM, he began a second career in commercial real estate brokerage and development in Atlanta, advancing to Vice President of one of Atlanta’s largest office park developers.

The stories of German submarine activity that he heard growing up continued to intrigue Harvey, and in 2007, he began work on his first novel, Grayton Beach Affair in his spare time. In 2009, he made the decision to write full time and is currently working on his second novel.

Harvey and his wife live in North Georgia where he fly fishes the North Georgia and the Rocky Mountain trout streams when not writing. Living in Key West opened Harvey’s eyes to the beauty of the area and influenced him to pursue sport fishing, diving and sailing throughout the Keys and Bahamas. They also live part of the year in the Panhandle of Florida where he fishes the Gulf waters.

After starting on the review copy sent to me for the blog tour, I had some questions for the author.


Two-Fisted Blogger: What is the inspiration behind Grayton Beach Affair?
James Harvey: I grew up in the area of Grayton Beach and learned of German submarine activity off the coast during the war.  I then learned of German POW camps that were established in Florida and the SE U.S.  I realized that a lot of people were unaware of both and thought it would make a good story .  I was able to incorporate an actual U-boat voyage and a German POW camp that existed near Grayton Beach to add depth to the book.  I started with the idea that it would be a war, action and danger story for the male reader, but when I introduced the female character and made her very strong and willing to take control of her circumstances,  the book evolved more into one of war, action, danger, sex and romance.
Two-Fisted Blogger: How much has Grayton Beach, Florida, changed since WWII? Is it still as isolated as you describe in the book?
James Harvey: Grayton Beach is still a small community of approximately 240 residents at the end of a two lane road.  There are only 3-4 businesses, including The Red Bar, a popular restaurant and meeting place for visitors in the area.  The Red Bar was previously known as Butler's store, a grocery store and bar, referred to in the book as Bailey's store.  In the 1970's, the residents were able to establish prohibitions against high rise condos and as a result, maintains an old world charm. There are new homes, but most are contructed to maintain the old "Florida cracker" style of architecture that I tried to describe in the book.  Nearby Grayton Beach are large developments such as Seaside, Watercolor, etc, but Grayton Beach is on 18 mile "scenic highway' 30-A that prohibits highrises, billboards and fast food chains.
Two-Fisted Blogger: How many ships did German U-Boats actually sink off our southeastern coasts?
James Harvey: I don't remember.  I did a lot of research on U-boat activity on the Gulf Coast and there are some really good non-fiction books that would easily answer that question.  Once I found U-67 and determined that her voyage would perfectly suit my needs to get my character to Grayton Beach, I focused on that.  U-67 sank 8 ships in the Gulf in the months of June and July, 1942.
Two-Fisted Blogger: It surprised me that Christian experienced such anti-German prejudice so long after the First World War, and yet well before fear of Germany's ambitions broke out again in the United States after Pearl Harbor (and quickly reached a fever pitch). Is this one of those trends in history that has been swept under the rug?
James Harvey: Growing up in the deep and segregated south in the 40s and 50s, I saw prejudice on all fronts;  Religion other than christian (even catholic), race other than white, etc.  A lot of the people were uneducated, struggling to make a living during and after the depression and distrustful of anyone not from the south.   I used that general distrust and prejudice only to move the story along, not because people were focusing on Germans.

Thanks, James, for taking the time to answer my questions.


I've been fascinated with all aspects of WWII since I was a teenager, so when approached to join this blog tour for a wartime novel, I made room in my schedule.


Grayton Beach Affair, as the title implies, is about an affair that takes place in the Florida panhandle, and how that chance connection affects the involved parties for the duration of the war. Despite the sex scenes in the book, I found the romance between Christian and Maggie to be presented quite innocently. This is love at first sight, pretty much. I once knew a gunbunny from the Aleutian Campaign who met his wife at the USO. When he first laid eyes on her, he told his GI buddies she was the one. Sixty years later, they were still together. So that kind of storybook stuff was not unheard of in that generation.
I've read/watched wartime romances about Americans trapped inside Fortress Europe (in fact, my first abysmal effort at a war novel had such a scenario), but not too many about Germans hiding out in the USA. Christian is not a Nazi, but there's no love lost between him and Uncle Sam, either, having lived in the Southeast USA and suffering some perhaps anachronistic anti-German bigotry. He's a civil engineer, which gives him a military deferment in the Fatherland despite being of draftable age. Nevertheless, his fluent American English makes him a candidate for a mission to rescue a Nazi rocket scientist from an American POW camp in Florida, near the title location. Even a loyal German citizen would balk at such a mission, but der SS haff vays uff makink you covoperate...in this case, the threat of conscripting Christian and shipping him to the Eastern front.
What I found most thought-provoking in this book was Maggie's dilemma. She intuits that Christian is basically a decent guy, sees some evidence to support that, and there is a physical attraction...yet she knows he is a German agent, on a mission for a foreign power her nation is at war with. His life is in her hands. Should she do her patriotic duty and dime him out, or trust her heart/hormones and hide him? I wonder what choice real life people would make in her circumstances.
Well, Christian is a decent guy, after all. The plot takes an interesting turn when, instead of returning to Berlin after his mission, he joins the French Resistance. He has opportunities to bed other women in France but doesn't, usually because he's still smitten by Maggie. As very well should happen in such a story, the two do meet again...but Maggie is engaged to a Georgia attorney. You'll have to read the book to find out what happens from there.

You can buy this book at Amazon or here. My thanks to Florida Book Bloggers and James Harvey for the review copy.