So This Guy Walks Into a Barsoom...

I don't go to the movies much, anymore. Two I really wanted to see so far this year were Act of Valor and the John Carter adaptation. Unfortunately, both came to theaters at roughly the same time. I saw the former, but don't know if I'll make it back in time to catch the latter.

Frankly, with the polarized opinions about the Edgar Rice Burroughs adaptation, I didn't know what to think. Well, it's good to have a network--Jim Morris came to my rescue. He watched it, and agreed to let me publish his report on the experience. Here it is:

My son Crews, named for my CO in Vietnam, called me last week. He said my six-year-old grandson Hayden had been totally psyched by the John Carter trailer that had been running on the OKC stations, and that he and my other son Ben were going to take Hayden to see it last Sunday.

All of that totally pumped me up as I had been a biiiiiiig fan of the John Carter on Mars books when I was maybe twelve. I flat loved those books, and was also psyched to see the flick. So the deal I made was that I would see them here in LA and Skype with Hayden afterward.

Called a couple of buds here to see if they wanted to go with me, and they did, but failed to figure on Spring Forward day and missed the gig. I'd be a bit snarky about that if I hadn't screwed up too. Went into the sixteen screen multiplex in Woodland Hills and strolled into the first theater I saw with John Carter on the sign. I was soon badly perplexed by the fact that I was in the middle of the movie and my 3D glasses didn't work. I watched it through to the end, gaining much eyestrain in the process, and then went and bitched to the ticket taker.

She kindly did not call me an idiot and asked if I had gone into theater 10. Nope, theater 9. "Uh, your glasses don't work in theater 9."

Tell me about it.

"Okay, you've only missed ten minutes in theater 10," so I zipped back upstairs and went in at the point that Carter was getting the hell kicked out of him in a Yankee jail. Gotta say I loved the flick. The art direction was fabulous, fully realizing Burroughs' vision. I doubt this was possible even five years ago. 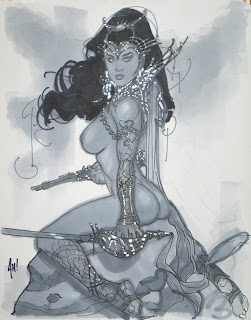 The screenwriters dickered with the plot and characterizations a bit, but not enough to do any harm to the movie. One change that I liked was that the character of Dejah Thoris was more fully developed.

I don't think anyone has ever claimed that characterization was Burroughs' long suit. In the books her principle role is to get kidnapped and rescued by John Carter, a lot. In the movie she is no slouch with a longsword. I like a semi-naked woman swinging a sword. It just seems right somehow.

Another by-product of the movie is that I downloaded all five books on Kindle for $.99 and am now about halfway through book three.

Talked to Hayden last night. He was totally psyched by the film, loved it. I also bought him all five books in print from Amazon and he's read the first three chapters of A Princess of Mars. My grandson, six years old. How about that?

BTW, for those who don't know it (and missed my previous blog posts), Jim Morris is an accomplished and renown author of some doggone good fiction and non-fiction, available on Virtual Pulp Press, Antenna Books and any other bookstore worth its salt.