Fight Card is Going the Distance

Real life keeps getting in the way of my blogging. It occurred to me the other day that there's been a lot of news to blog about, and I missed quite a lot of it.

Thankfully, when it comes to good books, it's never too late...not in the post-publishing-revolution world, anyway. There's no reason why good books ever have to go out of print, now. (I wish the not-so-good ones would, but that's another matter.)

That said, it's time to bring you up to date on Paul Bishop and Mel Odom's Fight Card series. I was fortunate enough to be one of the authors to contribute to the series writing under the "Jack Tunney" house name, and my Fight Card e-book has just recently been released as an Audible recording.

I am in good company. Plenty of talented writers have written one or more retro-boxing pulp to the series, and so far I've enjoyed each one I read. Meanwhile, Fight Card has spawned a couple spinoffs.

The original series is anchored to the 1950s and has been estrogen-free, but now there is Fight Card MMA (Mixed Martial Arts--contemporary) and Fight Card Romance. Below is a sampling of the titles which have been released since I last blogged about Fight Card.

FIGHT CARD: GOLDEN GATE GLOVES
San Francisco 1951
Conall O’Quinn grew up at St. Vincent’s Asylum For Boys, a Chicago orphanage where he learned the sweet science of boxing from Father Tim, the battling priest. After a stint in the Army, Conall finds work on the docks of San Francisco – a place where his fists make him the dock champion.  Soon, however, he gets on the bad side of a union boss and is set up for a dock side brawl designed to knockout his fighting career.  When Conall comes out on top, things go from bad to worse when he is framed for the docks going up in flames.
Along with Benson, his best friend and trainer, Conall heads for the hills in search of a lost treasure in the vicinity of a mine controlled by the union boss.  However, where Conall goes trouble follows and he is quickly embroiled in a heated grudge match between fist-happy miners and lumberjacks.
Championing the miners in an all out slugfest, Conall is about to find out there is more to fighting than just swinging fists … giant, hammer-fisted lumberjacks, the mine owner’s beautiful daughter, union flunkies, and mob thugs all want a piece of him … and when the opening bell rings, the entire world appears to be against him …


own business. It’s a hard and vicious road he walks and it becomes even more complicated when he falls hard for the electrifying Dorothea McBricker.


Dorothea’s brother, Teddy, has fallen under the influence of notorious gangster Duke Williamson – a powerful man who is pressuring Levi to join his stable of fighters or face off against the human killing machine, ‘Deathblow’ Ballantine. A knock-down, drag out, Brooklyn Beatdown is brewing, and Levi will need every ounce of his fighter’s heart if he wants to save not only himself, but the woman he loves … 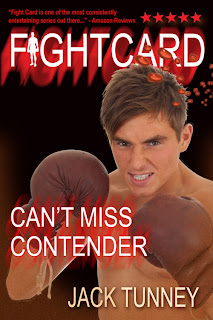 
Billy Flood was the kind of boxer who had ‘can’t miss’ written all over him.  He had the tools and talent to make him a middleweight champion.  But a few wrong turns changed everything.  Now, after a hard three year stretch inside the Missouri State Penitentiary, Billy is determined to get back in the ring and punch his way to the top. But, while other fighters his age have risen through the ranks, Billy is back where he started – fighting palookas, catchers, and tomato cans.


With his past on his heels and his future filled with obstacles, Billy finds himself backed into a corner by false friends and an unscrupulous promoter.  He may get his shot at becoming a contender, but will it cost him his future?  Can’t Miss Contender is another hard punching Fight Card tale ...


Mentored in the hollows of hardscrabble Georgia by mysterious loner Old Man Winter, then in a Chicago orphanage by ex-fighter Father Tim Brophy, James ‘Barefoot Bones’ Mason has relied on his fists to make his way. But it’s a long way from St. Vincent’s Asylum For Boys to the battlefields of Korea where Bones’ fists may not be enough.


Entered in an inter-camp boxing tournament by his commanding officer, Bones finds himself in a war within a war.  When a tenuous cease fire is explosively shattered, Bone’s is fighting against the highest odds of all – staying alive.


Can a skinny kid from the north Georgia mountains survive the hell of Korea and still have the guts to climb back into the ring one more time? The one constant in Bones’ life has been fighting – Lucky for him, he’s good at it.

Ray Kurt was one of the first guys to step into a sanctioned MMA fight – back when you scrapped four times a night and didn’t wrap your hands until you got to the hospital afterward. Now he trains fighters in his Kalamazoo mixed martial arts gym, searching for someone he can take to the top.
Young fighting phenom Tallis Dunbar might just be that someone, but Tallis comes attached to a whole lot of trouble. Detroit mob fixer Andru Harp wants Kurt to turn Tallis into an MMA beast tough enough to take on the Chicago mob’s fearsome fighter, High Voltage – the same man who nearly killed Tallis’ brother a year earlier.
For Detroit and Chicago it’s all about turf, but for Kurt and Tallis their lives and redemption are balanced on a razor’s edge.  Kurt is used to fighting with few rules, but now there is only one – survive …


Jimmy Doherty, a hard-luck orphan from the south side of Chicago, was mentored in the sweet science of boxing by Father Tim Brophy, the Battling Priest of St. Vincent's Asylum for Boys. Jimmy’s fists were good enough to take him to LA where he has begun his rise up the local fight-cards. He has big plans to be a contender and even bigger plans for Lindy – his trainer’s only daughter, who's sweeter than apple pie and harder to resist.


But when Lindy is arrested for killing a boxer with ties to gangster Mickey Cohen, Jimmy is forced to join forces with the arresting detective – who would like to do much more with Lindy than put her in handcuffs – in a desperate search for the real killer.

I've got some of these books on my Kindle, and will probably post reviews when I read them. This is just a sample, folks. To get a more comprehensive list of the books in the series, go visit the Fight Card website--it's got some cool stuff for readers and fight fans.