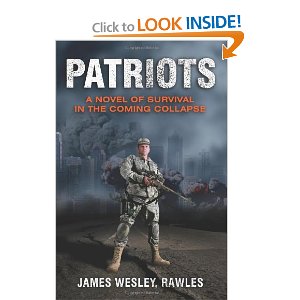 I'll start by applauding Rawles for what he tried to do with this book. The setting is a SHTF/EOTWAWKI scenario instigated by an economic collapse--something we might be seeing unfold right now. Along with all the chaos you'd expect with an overnight disintegration of the American way of life, political opportunists don't let this crisis go to waste, transforming the USA into a 3rd-world police state. Absolutely dead-on so far.

The novel was written around some survivalist information Rawles has obviously researched extensively. I didn't agree with all of it (particularly weapons choices and use), but what most readers won't forgive is the length of some of those digressions.

It is the fiction storycraft which is most lacking. Rawles didn't commit some of the most heinous acts of storytelling incompetence that make you toss the book away in disgust, but most of the characters were so unremarkable that I struggled to differentiate between them. Some get married and have kids, but it's all told from such an emotional distance that I had little feel for the personalities involved. Aside from a couple cannibal banditos, there was no individual villain on the reader's horizon until over halfway through the novel (though some of that character's dialog was spot-on perfect). There was a sub-plot about two brothers on the run which I kept expecting to merge with the main plot, but never did. Rawles devoted a chapter or two to their escape from the authorities, then apparently forgot he had written them. Worst of all, the ending was from the cookie-cutter I've seen used in this genre far too often. I'll just call it a "delusional optimistic assumption of victory and restoration." And they lived happily ever after.

I recognize and appreciate what Rawles was trying to do, and don't regret buying the book, but it falls short of its potential and is, unfortunately, lackluster.
Posted by Hank Brown