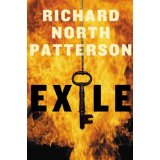 If I only read books by authors who I agreed with ideologically, I would probably be as illiterate as the mainstream culture has become. If I were to boycott authors whose ideology I find repugnant, that would probably reduce my library by at least 90%. I'm guessing Mr. Patterson and I would irritate each other greatly were we to have a conversation about the Middle East. However, he is an able storyteller who wrote a fine piece of fiction it was hard to put down.

David Wolfe, a lawyer with a promising career in politics ahead of him, engaged to an impossibly good woman from an influential family, damages his own future beyond repair when Hana Arif, an old college flame, reenters his life after 13 years. The lawyer happens to be of Jewish lineage. The woman from his past is a Palestinian activist. She doesn't just cause him to flush his life down the toilet the way women normally do. She's the government's suspect in the assassination of the visiting Israeli prime minister, and she asks David to represent her.

Patterson serves up tension, suspense and conflict in generous doses, while revealing just enough to convince the reader the assassination was part of an intricate conspiracy meant to implicate Hana...but never quite enough to reveal how innocent (or guilty) she really is. Some people will see the major plot twist coming, but that doesn't reduce the grip the story has on you.

Where it breaks down is during David's trip to Israel to dredge up evidence for his case. The plot is not advanced significantly, if at all. All that is advanced is some thinly veiled soapboxing by the author. Many writers have been guilty of this--perhaps even me (and on this very topic: Israel/Palestine), though I'm pretty sure I showed much more restraint than Patterson.

Patterson attempts to make it appear he is "even-handed" and shows "both sides." Not really. He beats the reader over the head with the Palestinian side. Then, to make it fair by his standards, he admits that the Holocaust took place and Jews have suffered throughout history. That is the extent of the Jewish side of the argument as Patterson sees it. And though other political axes are not as blatantly ground, there's little mystery about the assumptions he goes into this with: The worst aspect of radical Islam is that it's not feminist. Anti-Semitic terrorism is caused by Jews' mistreatment of Palestinians. Right-wing boogymen are both stupid and crazy, yet dangerous, and really dupes of the sophisticated enemies of peace around the world. Those who believe the Bible is true...whether practicing Judaism or Christianity...are dangerous right-wing boogymen.

Upon David's return to the US and the trial, the narrative jumps back into gear. It's a courtroom drama from then on, and written well. The legal minutia seemed plausible, yet never bogged down the plot with courtroom tedium.

The so-called "justice" system in America has become one in which prosecutors are not interested in seeking justice, and don't care whether defendants are innocent or guilty. All they care about is getting a conviction. I thought this was reflected accurately. But the flip-side is also true: Defense lawyers couldn't care less whether their clients are guilty or innocent. All they want is to get their client off. This is represented as well, though not as obvious. David is never certain about Hana's innocence, but he does ask her, presumably because he won't represent her if she was involved in the assassination. In real life the lawyer would probably know, and if the client was guilty, would fabricate a story for them to testify with as fact. But this is not a criticism of Patterson's novel. It wasn't his intention to dissect the legal system. And the behavior of both David and the prosecutor (Sharpe) is easily believable.

Hana is married, BTW, with a 12-year-old daughter. Her husband is the one she chose over David, because her family approved of him, and would have died of shame had they known she once had relations with a Jew. Though the characters don't speak of it, and David doesn't overtly think about it so far as is revealed, the reader is led to hope, via Patterson's storytelling voodoo, that 1. Hana is innocent, 2. her radical sexist husband will be taken out of the way somehow, and 3. Hana and David can find a way to be together again. This adds to the tension throughout.

If you enjoy courtroom suspense, you'll probably like this book.