Pulp Fiction Revival; Ebook Revolution, and My Own Two-Fisted Retrenchment

I've been dealing with some challenges lately that have really put a damper on my quest for world domination. Nevertheless, my criminal genius mind has kept busy plotting and scheming. More on that in a moment.

In the last year I've met some other fans and writers of pulp or pulpesque fiction, including Jack Badelaire at Post Modern Pulps and Jack Murphy at Reflexive Fire. It's been encouraging to interact with them, to see the beginnings of a possible pulp revival taking shape, and to find that, though technically competitors, at least a handful of us share ambitions that could dovetail nicely to everyone's benefit. I certainly want my own literary efforts to meet with success, but I want, almost as badly, my fellow pulpeteers to succeed, too.

Because a few of us are thinking along similar lines, I am envisioning a reawakening of interest in the genre sweeping along on the coattails of the ebook revolution already underway. But I can't predict how it's all going to shake out. I have signed on to participate in some of the pooling of resources others have proposed, and I'm eagerly anticipating what could result.

Meanwhile, let me share part of my personal plotting/scheming in the 2-fisted microcosm of the pulp universe: 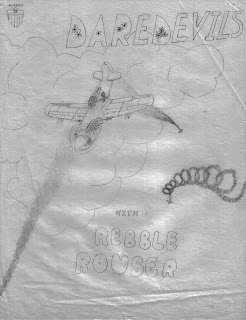 Here is a cover concept I sketched on typewriter paper when I was a teenager--giving you an idea how long I've had a dream of publishing my own pulp magazines (and, if you've read Barbarian Nation, how much my concept for the Rebble Rauser character has evolved). What the blazes is a typewriter, right?

Well, there is a glut of information on the web about the history of pulp fiction that I won't regurgitate here. Let me just fast-forward to this:

This short-lived magazine from the late 1980s was not so much an inspiration, as a motivation. Although really a b&w comic book in format, this was a pulp mag in flavor (though as you can tell by this cover, with a decidedly "post modern" attitude), featuring tales of feudal Japan, the Wild West, Vietnam, post-apocalyptic California and the Depression-era Ozarks, to name a few.
Knowing less than nothing about publishing, I let life happen and shelved my dream of producing retro-pulp of my own. When I finally overcame my own stubbornness and took notice of the e-publishing revolution, I pulled Virtual Pulp off its virtual shelf and dusted it off. But even while accepting new technology, I was still clinging to some dated publishing ideas.
See, Savage Tales was perfect for me, because I love reading in almost all the pulp genres. Since I love writing in different genres as well, I packaged Virtual Pulp pretty much the same way. But...big surprise, here...most people aren't like me. They may love westerns, but hate war; love sci-fi, but hate fantasy. You get the idea.
So, realizing this, I have decided to scrap my plans for Issue #2, for the foreseeable future. But that doesn't mean I plan to quit writing/publishing short (sometimes serialized) pulp tales in various genres. I'm merely liberating them from the old-school grab-bag packaging, and letting readers pick and choose for themselves which genres/characters they want to follow. Starting this week (barring any publishing mishaps), some of my short pulp tales should become available for the Kindle at 99 cents apiece. Availability in other ebook formats will follow in succeeding weeks.
To sustain some semblance of symmetry to this blog post, here is the cover to my first offering in the Barbarian Nation continuity, which centers around my evolved Rebble Rauser character: 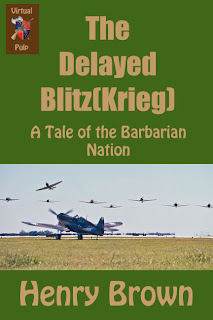 My logo in the upper left might be difficult to make out in the thumbnail, but suffice it to say that I'd like to make "Virtual Pulp" my e-publishing imprint, rather than the title of a series of anthologies. Same dream; different strategy. I'm sure all my loyal 2-fisted blogees know about DC Comics. "DC" came from Detective Comics, the title of the first comic book they published. What I'm doing is similar, though for different reasons.
I might not have a chance to blog again until next Sunday, but I'll try to post updates on my diabolical machinations as I'm able. My alternate history novel is still in the works, and I'll be publishing more short pulp works in addition as time and the muse permits.
Posted by Hank Brown