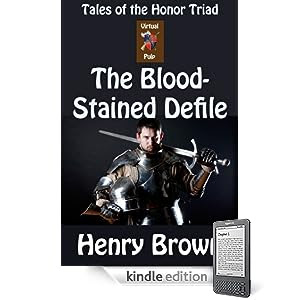 My new e-publishing strategy is out of the gates. It might be a couple weeks or months before the next phase in my plan solidifies, and I start getting more short pulp adventures out there, but I've got five 99-cent titles out now, so that's a start. These two covers are from my hack-and-slash fantasy series; Tales of the Honor Triad. 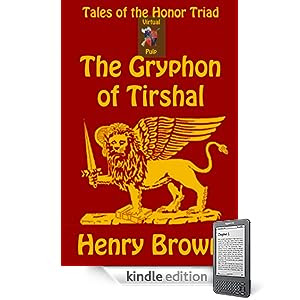 I actually wrote Gryphon first, then "went back" and wrote the origin story, Bloodstained Defile, which I included in the anthology. The next couple installments I have in mind will progress from that first one, but after that I doubt I'll try to keep it all chronological. Robert E. Howard didn't (his first Conan story had the Cimmerian already a king, then later stories featured a younger Conan during his wandering barbarian days) and nobody seemed to mind. The radical difference in cover concepts is partly an experiment. I'm conducting a lot of those, these days.

There are other short pulp adventures I've written over the years. I'm still having trouble finding some of them. Others I haven't been able to convert from the old WordPerfect files yet (and my laptop just bit the dust, which will seriously limit productivity for a while). And there are more ideas I just haven't translated from brain to print, yet. Nevertheless, I am advancing on multiple fronts. It's just that my advance is at more of a Bernard Montgomery pace than a Heinz Guderian.
Posted by Hank Brown