I Gotta See the Expendables 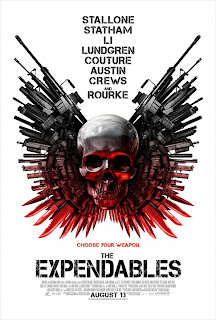 I've seen the title here and there, but didn't know what the movie's about. With a title like The Expendables, I would expect a war movie (in some of my blurbs/synopsis of Hell and Gone I even used the term "expendable" to describe the Has-Beens). But then I've learned not to assume anyone in Hollywood uses logic--even when choosing a title for a film.

Well, evidently, The Expendables is indeed the kind of flick the title suggests--with a comedic approach, that is. Kinda' The Dogs of War with a Lethal Weapon groove. Not since The Substitute can I recall a flick with good-guy mercs. And the cast! Almost...almost the dream cast I used to joke about for the Ultimate Summer Blockbuster Artistically Questionable Action Flick. Stallone; Swarzenegger; Lundgren; Jet Li...

(My own cast extended to Norris; Bronson; Eastwood and Jim Brown. OK, so considering human aging, the feasibility of this fantasy action flick evaporated after the 1980s. Still, they could have added Chuck Norris. Should have--obviously acting talent isn't the primary criteria. I suggest you do a Google search, BTW: "where is Chuck Norris?")

I feel a powerful magnetic pull from the cloud of testosterone which must be hanging over my neighborhood movie theater. How can I free myself from the missus for a couple hours?