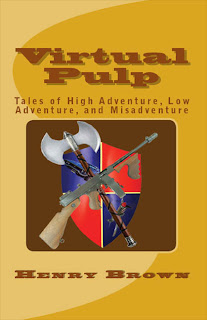 I dreamed up this endeavor many years ago, wanting to bring readers the sort of exciting adventures (in various genres) once available in the pulp magazines. Think Conan, Tarzan, The Black Bat, Buck Rogers, Sam Spade, John Carter...you get the picture, right?

Here's the back cover blurb:


From medieval Europe to Reconstruction; from a post-apocalyptic future to an alien world's Dark Ages, the drums pound in adrenaline-charged unison. Strap yourself in for a wild escape from the mundane, into adventures that transcend space and time.
Allan of Barnsdale pledges loyalty to a doomed knight in exchange for inspiration to craft his tale of King Arthur...never imagining they are en route to an ambush by outlaws in Sherwood Forest.
Pick Garver returns to his hometown after the Civil War a hero to some, a turncoat to most, and less likely to be with his true love than when he left.
Three warriors from vastly different races must battle a sorcerer, an invading armada, and each other, while desperately seeking honor in a world where treachery is the norm.
Mechanic, armchair engineer and hot-dog pilot Rebble Rauser and his fellow citizens of the "Barbarian Nation" protect their sovereignty with blazing wing guns; but an old rival of Rebble's makes a surprise visit during a war in a chaotic American future.
Posted by Hank Brown