The Seventh Compass Point of Death by Richard Sanders 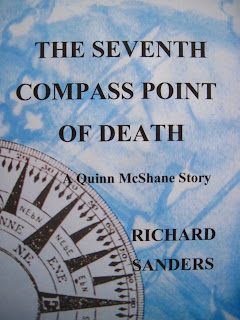 I'm tempted to classify this book as "hard-boiled," though it's not really a detective novel. It reads like one. The plot unfolds like one. The main character draws as much sympathy as Sam Spade, Phillip Marlowe, Mike hammer or Kinky Friedman. There are clues, surprises and twists... but not a mystery, per se. Still, I hesitate to call it a thriller, despite the terrorist plot and surrounding intrigue.
Whatever genre this book belongs to, it is a gripping, fast read.

Our hero, Quinn McShane, similar to author Richard Sanders, spent some time as an unwilling guest of state government before moving on to a career in the media. Through a once-casual acquaintance, he is ensnared in a terrorist conspiracy involving key players who are not quite what you expect. McShane is a bit too gullible a few times, as the classic hard-boiled flatfeet are on occasion (and real people like me are way too often). He also commits the cardinal sin of pulling a gun when he's not fully prepared to use it. But he redeems himself with decisive action and gutsy gambits at the point of no return.

The terrorists turn out to be a rather pathetic crew--but no less dangerous for their pathos. Not grim, fanatic killers, but more like neurotic delinquents who might have turned to "normal" lives of Big Apple crime, if not surrounded by a powderkeg rivalry between Sunnis and Shiites. Sanders cleverly portrays their ignorance of their own faith, and it is clear that McShane has studied the Koran (or is it Q'uran?) more than they have.

In keeping with the hard-boiled tradition (and I should point out here that I don't know whether Sanders intended to follow that tradition), McShane's romantic involvement during the plot is rather devoid of romance. And the point may not have been romance anyway, but just the reasonable development one could expect between two people in the circumstances McShane and Shala find themselves in. There is minimal emotional investment for either character...or the reader.

I can't count how many novels I've read that were set in New York City. Few of them, however, made that metropolis come alive for this reader the way Seventh Compass Point of Death does. Sanders evidently knows a lot about NYC, and enlightens while painting the backdrop without overwhelming the reader with details.

One final note: I seldom find the title of a book to influence me far for good or bad. But this title fulfills a savvy double entendre' that I really, really appreciate. Just one more thing to look forward to when you read this book.
Posted by Hank Brown