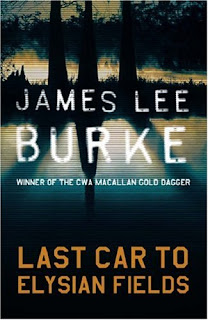 I checked out this audiobook from the library because the idea of a cold-case murder mystery concerning a blues man half a century ago reminded me of a great book by a friend of mine I read some 12 years ago.

I must admit, the actor they chose to read this book probably influenced my experience for the worse. Since the protagonist is a native Louisianan, I guess they figured somebody with a Deep South accent would be appropriate. Between the accent and his rasping about-to-kick-the-bucket squawk, I had to listen to the first disk twice before I could follow him.

Anyway, Detective Robicheux (?) works this case out by interviewing witnesses (flashbacks move him closer to solving the puzzle/plot resolution) and pissing off all the other cops he knows, including his boss. He's a tee-total reformed alcoholic, but the way he wrecks the lives of those who care for him, I'd hate to have seen him when he was still drinking.

The flashbacks paint an infuriating picture of social injustice, but I finished the book with no sense of accomplishment, epiphany or even fond memories of an enjoyable ride. My emotions ran from fury to depression, with no pleasant feelings to dilute the aftertaste.
Posted by Hank Brown