Liberation of Paris: The Sergeant # 4 by Gordon Davis 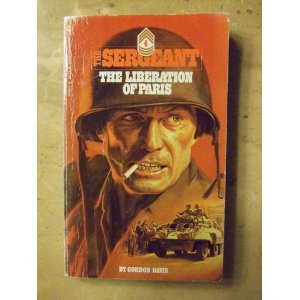 I first discovered The Sergeant as a teenager, before I imagined I would one day be a soldier myself. This book was my introduction to the series, and to the war genre.

Davis' work is rare in that whatever age I was when I read it or re-read it, the experience was just as entertaining (though I developed an appreciation for his scene shifts into the German field commands to provide strategic perspective as I grew older).

The Sergeant is Master Sergeant Clarence J. Mahoney, a senior non-com from Hell's Kitchen in NYC, who speaks fluent French and German, and is invincible in bayonet combat (which he sees a lot of). He's actually a rather despicable brute who you would probably shy away from in real life. He's a selfish, ruthless pragmatist with limited intelligence or imagination, who will ____ any female willing to raise her skirts (and, like the bayonet clashes in this WWII setting, the frequency of instances defy believability). And I mean ANY female, as proven in this story. And he's not ashamed to pay for it, either. His trusty, loyal sidekick is Corporal Cranepool, who he speaks to with extreme condescension. Sounds like a real-life NCO, personality-wise.

The first book of the series is a cloak-and-dagger pre-invasion mission with the French underground. The First 3 were published by Zebra Books. This book marks Mahoney's first literary forray into conventional combat published by Bantam.

The story opens with Mahoney fighting the division heavyweight champ as a sort of morale-boosting exhibition for the troops. Our pack-of-cigarettes-a-day, boozing, whoring protagonist is too tough (and stupid?) to go down from the champ's more polished boxing skills, and clubs him unconscious. This gets him the attention of some senior officers, who decide to attach him, Cranepool and some other G.I.s to a French formation slated to liberate Paris from the Germans.

But nothing is cushy for Mahoney for long, and he finds himself in the midst of a see-saw tank battle between the French and Germans, and then in urban combat during the liberation. At one point he enters a Parisian shop during the lull in battle, and hears the sound of a typewriter beyond the locked door of a basement. This strange detail is never overtly explained, but during another scene he encounters war correspondent Ernest Hemingway, who is covering the liberation. I suspect it was Hemingway locked in the basement with the typewriter.

OK, so I've just described an exploitative escapist book full of graphic violence and sex, about an amoral neanderthal who you wouldn't want anything to do with if you met him in real life. Now I'm admitting that I always enjoy reading it and will probably read it again some day.