The Dawn of Apartheid: Power of the Sword by Wilbur Smith 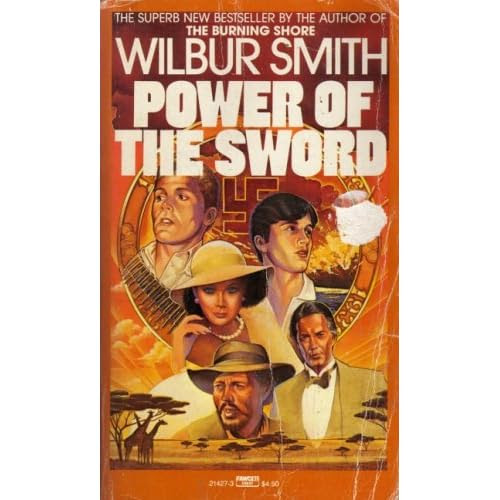 I discovered Wilbur Smith by chance. The public library just happened to have Triumph of the Sun in audiobook and I just happened to find it when desperate for something to listen to during commute time. Since then I've been looking for his titles.

Smith's chosen genre is one I guess I'd label "historical adventure." He follows the Courtney family's generations through different periods of history, but always somewhere in Africa, so far as I can tell. Some of his novels strike me as sagas while others, like this one, might be described as "epics." For some reason Africa has always fascinated me, and the continent comes alive through Smith's skillful prose.

This novel's setting is South Africa, from the early days of the Great Depression up to the beginning of Apartheid. I've long considered Wilbur Smith an armchair social anthropologist, and it may not be as evident in the characters of this book, but he certainly gave every last one of them some serious flaws...so much so that it's difficult for me to decide who the hero is. I guess I'd have to name Centaine Courtney as the heroine. She may be an adulterous, ruthless capitalist opportunist who destroys those who get in the way of her ambitions with no remorse, but the author bothers to show sympathetic traits in her perhaps more than any other character.

She seems like a choir girl compared to ganglord/political organizer Moses Gama; his half-brother Swart Hendrick; Centaine's bastard son Manfred, who grows up to become a fanatical Nazi; or even her ostensibly legitimate son, Shasa, who grows up to be a pampered, womanizing, shallow fop. I think my sympathies lied mostly with Lothar De La Rey, father of bastard Manfred.

At the very beginning of this tale, Lothar has just gambled all he has on a fishing business and through cunning and determination, has just brought in a haul that will pay all his debts and put him on firm footing to build an inheritance for Manfred. That's when Centaine shows up to utterly wreck him and his business. She has bought up his debt and now prefers to let his fish rot in the cargo holds than to let him can them and use the profits to get in the black. She has bad blood for her former lover and it's about to cause a vicious cycle.

Lothar decides that an eye for an eye is in order, and plans a robbery of Centaine's diamond mine. It's a clever and detailed plan, actually, with multiple safeguards...all rendered moot by fate, Centaine's tenacity, and, most of all, Lothar's fits of mercy. It goes downhill from there, and I must admit I skimmed a bit when I got too disgusted with the characters. Not just the deceit of Moses or his revolting behavior; or the corruption of the weak-minded Swart Hendrick; but also the gullibility and stupidity of the book-smart Manfred. And what he does to the girl who sincerely loves him. Of course my disgust is probably testament to the author's masterful orchestration of the elements of fiction.

Half brothers Shasa and Manfred are on a collision course that has ramifications well beyond the looming global conflict. When they do come full circle, their meeting was rather disappointing for my taste. Still, even at his worst (?), Wilbur Smith is a master storyteller, and despite my issues with this book, it's rich with South African history, geography and cultural insights. And for those who like family dynasty drama on an epic scale, this book is dripping with it.
Posted by Hank Brown